The week continues with more powerfull music, more crazy fun dj sets (Tim, Christoff and Ken would control the setlist for the afterparties), more drinks (surprising few mad dogs being drunk this year). Here's a brief summary of the 2nd and 3rd day with Resonance: 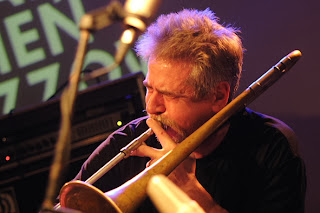 Set I
Steve Swell – Waclaw Zimpel – Tim Daisy
A dynamic interaction between the three, one that let you appreciate both melodic and hectic side of improvised music.  The melodic - that would be for the most part the domain of Waclaw's clarinet, Steve countered those lines with trombone rambling, but there would be some parts where all three musicians would just kick it up a notch. The adventurous set closes with a primal ethno-passage with both Steve and Waclaw plaing wooden shepeherd flutes.

Set II
Ken Vandermark – Christoff Kurzmann
Further prove of how a vital role Kurzmann's electronica might prove to be for the orchestra. He's presenting somewhat of a very organic to the digital instrument, most of the times transforming the sounds of Ken's reeds which created a unreal impression of Ken playing against a distorted echo of his own self, given plenty of space Ken would choose his notes wisely, adding new layers to the mysterious music. Christoff would also sing two poems in a semi-hushed, semi-declamatic way, against a slightly ambiental, minimalistic background - poetic and eerie, not unlike some Dead Can Dance songs.


Set III
Mikolaj Trzaska – Magnus Broo – Mark Tokar – Michael Zerang
A classic, if rare these days, instrumental setting - sax-trumpet-bass-drums. With such great musicians it seems like a solid recipe for some joyfull and intense free-jazz and it definitely was the case. Freewheeling, rollicking rhythm and explosive sax - trumpet exchanges filled and intense set. Mikolaj seems particularly at ease and his letting his sax loose, but all the M's are clearly enjoying the playing together and the music reflects it.

Day 3
Set I
Christoff Kurzmann
For something completely different - a set of minimalistic, drone electronica, hypnotic, surreal and gloomy. A slightly uneasy dream, the mysterious aura of which is completed with another two poems. A kind of music proves the relativity of time-space continuum. A sort of a hypnotic dream which leaves you unsure about how long have you really slept and what really happened in it. A very different sort of expression in comparison to the other sets of the festival and slightly repetivie in comparison to the performance the day before.

Set II
Steve Swell - Magnus Broo - Per-Ake Holmlander
An unusual brass trio line-up, no drums, no bass and sort of liberating lack of conventions. Twisted sounds, intertwining melodic lines, a plethora of strange sounds coming from all the three brass instruments. Conceptual and intriguing, something to push both the musicians and the audience out of the comfort zone. 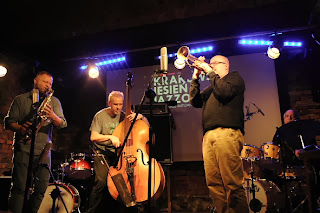 Set III
Mikolaj Trzaska - Dave Rempis - Mark Tokar - Tim Daisy
That was a true free-jazz battle. Two saxophones on the frontline leading the charge - Dave with adding some muscle on the tenor or splitting the air with sharp alto's tone and Mikolaj rounding the space up with his broad alto tone and cutting vibrato. Just a boiling bowl, incessant flow of musical explosions (the synchronicity and harmonic connection betwenn the two reedman was incredible) with the mighty groovy rhythm section and two passages of raw lyricism to add some balance. Ferocious and invigorating playing - one of the definite highlights of the week.

(only one element of the ensemble below is different but it changes completely the music. It's a good occasion to remember this band though so here is:)