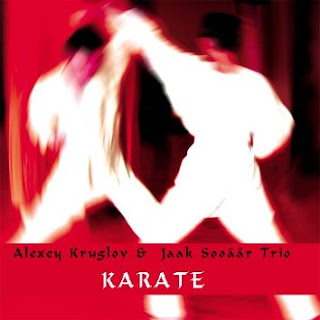 Could be simply the fact that I didn't follow the subject close enough, but a lot of very promising new music is coming our way from Eastern Europe, often via polish jazz-soil as a bridge (Mark Tokar, Ilia Belorukov). Obviously it's no news to Leo Feign as Leo Records introduced western audiences to a considerable number of artists coming from post Soviet Union countries, starting a long time ago with the famous Ganellin Trio. Alexey Kruglov is a mojor discovery (it's his third cd for Leo in just a year) and not only a continuator of Ganellin Trio tradition (he has played with all three members of the trio) but also one of the main figures of Moscow improvising scene.

"The Battle" (by Alexey) stars misty, with a short poem, buth then the snare starts marching, Alexey introduces a theme that sounds very much like a patriotic, guerilla song, to engage in a triumphant improvisational charge. There's folk-ish simplicity and punk-ish rebelious attitude to it. In short - they rock. The swirling, distorted guitar solo sounds great, so does the theme played unisono by the frontline. "
Rally" (by Jaak) is a dynamic, rock-fusion piece with a straight ahead beat and catchy, coincise theme. Alexey surprises playing harmonically on two horns at once, much in Roland Kirk vein, but there's less circus to it, kudos to Mihkel Malgand whose bass playing on this one puts you onto the groove train.
"Pust' Vsegda Budet Solntse" is a patriotic song, hymn of the communist youth organisation. Starts with a gentle solo sax interlude, but the urban groove is introduced, with ominous guitar echoes and emphatic declamation of the lyrics, the joyful theme is played in jumpy but somehow bitter , maybe ironic way. The piece includes also my favourite guitar solo of the album as Jaak starts happily dancing around the groove and melody. The drums solo is nicely melodic, subtle. The whole piece somehow reminds me of Jimi Hendrix's take on Star Spangled Banner, although I might be overinterpreting the significance of its inclusion.
"The Ascent" (Alexey again) is the most serious track of the album, with a solemn, dramatic theme, somehow a battle cry again. The frontline engages in some dark, atmospheric sound spheres exploration as Alexey plays with a muted sound, Jaak produces some sci-fi, suspense effects on the guitar. Only to get wilder as Alexey takes again two horns at once (harsh, ear-piercing sound) and Jaak starts shredding and abusing the guitar strings and then again get more experimental and deconstruct the sound produced with live electronics, and it all starts to sound like a mesh of noise and whistling. And while this mixture fades away, the solemn, moody theme returns, epic yet disturbed, distorted, fuzzed, dark and dangerous.
"Karate" (Jaak) is again more rock-fusion-minded, simply beat, simply theme, infectious drive as they rock forward without hesitation. And Alexey's solo gives it more abstract polish. The composition , bit cartoon-ish is bit forgettable actually but the strong playing and compact form saves it.
Overall this is a great album, full of rebelious energy, combining folk, punk, rock and jazz influences into one wild mixture, yet very cohesive. Don't be frightened also by the presence of the poetry as it is very limited, fits the music great and russian language is very melodic (especially if, like me, you don't understand a word). Imaginative playing and very energetic. Great example of jazz that rocks!