Orioxy - The other strangers [Unit Records] 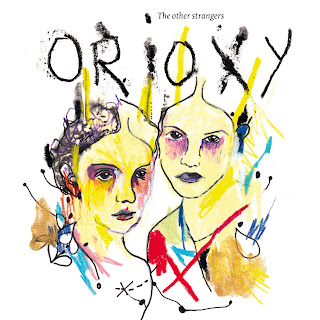 Orioxy played a very inspiring set couple of weeks ago in Krakow at Piec'ART club. In the centre of the musical picture there are two women and their artistic connection, the base of the quite particular instrumental line-up where voice and harp lead the way.

Yael Miller's voice is strong, clear, both sharp and sensual. Some of the song lyrics are written in hebrew which adds more layers to the ethereal, slightly exotic and mystic feel of the music. Julie's Hampiche harp is the cornertsone of the poetic, slighty dark and yet dreamy sound. The two are supported by irresistibly simple, earthy drum and bass grooves.

The group combines influences of classical, jazz, ethnic and rock but there's really much more to it than genre crossing. The Orioxy's music contrasts the heavenly and earthy, the delicate lightness and poetic shadow and finds a way to balance those elements together.

Each song has its own original story to tell, there's bit of theatrical drama to some of them but it is delivered with true passion and conviction. Orioxy's sound may intrigue at first, but it strikes, haunts and charms you at the same time soon enough.

The whole cd is available via band's soundcloud so trying to write anything more seems pretty much redundant. Without further ado let me just recommend the listen which hopefully you'll enjoy as much as I do :