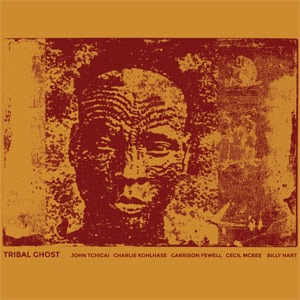 John Tchicai remains one of the unsung heroes of free-jazz, having performed during his New York residence in the 60's (1963-1966) with such greats like Albert Ayler, Archie Shepp, Milford Graves, Don Cherry, Roswell Rudd and last but not least John Coltrane (the milestone "Ascension" album) he returned to his native Denmark, and for the next decades he would divide his time between teaching and performing. He died last year, having suffered brain hemorrhage

The "Tribal Ghost" presents four pieces recorded on february 9th and 10th of 2007 in the legendary space of Birdland, with Tchicai leading a quintet formed by himself, Charlie Kohlhase at the frontline, Garrison Fewell on guitar (also the composer of three tunes) and the stellar rhythm section with Cecil McBee on bass and Billy Hart on drums.

The music on the disc (vinyl only release) shows musical wisdom and sincerity. The music has natural flow, nothing seems forced, the music draws on the tradition of free jazz with some ethnic, blues infusions. "Tribal Ghost" begins with mystic tune dark and bluesy, mysterious, slighlty exotic touch or percussion. The "Queen of Ra" is a meditative peace, with a chant-like melodic theme, percussion gongs, drone bass notes, underlining the shamanic explorations for the soulful saxophone by Charlie Kahlhase and freely joyfull Tchicai. "Dark Matter" has the leader on the bass clarinet, with the double-reed frontline and the bass digging a slow and graceful groove and jazzy guitar filling the soundspace with spare bluesy sounds. The album is ends with Thicai's tune "Llanto Del Indio" a mourning chant, intimate, peacefull, filled with sadness and yet the sense of consolation. The piece gathers tempo and momentum but the tribal elements of the music, throughout the LP, never fall into the abyss of the exuberance, the music always mantaining its intimate, meditative feeling.

The playing is passionate yet controlled, elegant, immaginative, there's plenty of feeling, intimacy, tension. The two frontmen practically finish each other lines (the Tchicai's fiery solo, against the baritone, bass and guitar stating the riff is one of the most intense moments of the cd). The rhythm sections is subtle, precise and gives energy, as long-burning fuel. Fewell's guitar cements the band, jazzy, bluesy, fabulous feeling, never overplayed, modest and yet crucial to the group's sound.

"Have a good life and thanks for spending some time with us" - Tchicai says goodbye as the concert ends. It should be us to thank him for sharing his music with us. A beautifull music.