Gustafsson's ability to lead bands as well as play in the orchestras (Chicago Tentet, London Jazz Composers Orchestra, Barry Guy New Orchestra) is well documented but I must admit I did not know what to expect of him leading such a big ensemble (although Fire! Orchestra project did promise a lot). I had a sneak of what's about to happen on saturday during one of the weekdays as I could overhear the band practice, excitement is the word. 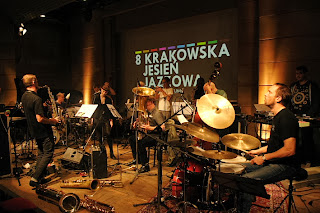 NU Ensemble presented one extended multimedia piece, the main axe of it being the two solos by Stine J Motland who was simply spectacular and
quite simply stole the show - modulating slightly the circular and obsessive phrases. There were a handfull of impressive solos - Ingebright Haker-Flaten's melodic lines underlying the earthy ethnic sounds of guimbri on one side, Augusti's Fernandez's spaced out psychodelia synth on the other. The two rhythm sections provided energy and drive in abundance. The compositions sequenced in the colourfull and richly textured passages of abstract semi-conductions and powerful tutti's. There were plenty of abrupt changes in direction and dynamics, some tunes would disappear only to resurface later in the piece creating a sort of continuum within the musical structure. 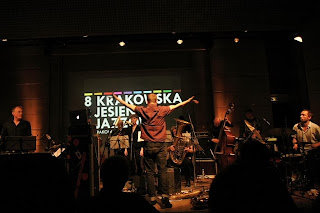 One might try to dismantle the particular sections and solos but let the greatest of the compliments for the orchestra's performance be this - they've somehow affected the space-time around the Manggha area because somehow they manged to squeeze 80 minutes of music within what hardly felt like a half of an hour. Colourfull, suprising, suspensefull and, ultimately, a bit of structured insanity.

Thank you all involved in making this week possibly. In 5 weeks time another marathon is coming - a week with Resonance, I can't wait.