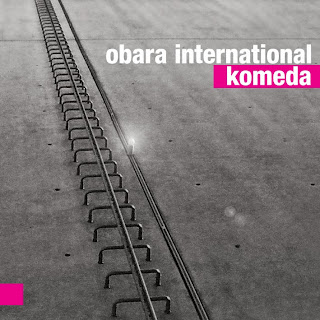 Krzysztof Komeda's legacy over the years became a foundation of polish, or more widely, european jazz. Throughout his brief career he excelled as composer (including film and theatre scores), leader (introducing to jazz music future greats like Tomasz Stanko, Zbigniew Namyslowski) and, last but not least, pianist. Maciej Obara's is one of the foremost jazz voices in Poland in his generation and his tribute to Komeda is a manifestation of continuity of jazz history.

Obara's take on Komeda's music is both modern and very personal. You can feel the respect and admiration toward the original but risks are being taken, first of all with the selection of pieces as Obara chooses a pair of less popular songs from Komeda's book "Ballet Etudes and "Walter P-38", "Litania" has been made popular by Tomasz Stanko and "Kattorna" comes from the milestone "Astigmatic" album,  few other melodies are presented in the form of a medley, Obara' selection has a nice balance between well-known and obscure, escaping some "obvious" choices.

The quartet showcases brilliantly the most crucial elements of Komeda's music, the romantic lyricism, the dramatic tension between expansive and intimate, european melodic discipline and rhythmic freedom of american jazz.
"Walter p-38" features a dynamic saxophone solo, on the verge of avant explosion, beautifully varied in forms of expression piano statement and freewheeling rhythm section (with an intimate bass-piano duet coda). They dig deep into compositions and find unexpected layers within their inner structure. The recording is a live release and the energy, the intensity of the band playing on stage is palpable and appreciated by the audience (who applaudes the most effective solos).
"Kattorna" gets a more coincise and highly energetic interpretation, with a nice twisted hoppy notes on the bass and searching sax solo. The four other pieces allow much more space for solos and creative explorations, each clocking circa 15 minutes, the most extensive being the 20 minutes  medley which, given how it goes through dynamic extremes (from enchanting bass solo to obsessive rock drive and saxophone ferocity) might be the most impressive part of the album.

The playing is excellent, Dominik Wania's versatile and sophisticated style of playing brings some elegant counter-balance to the more unpredictable Obara, while the often rapacious chords and clusters fuel the harmonic bite of the most intense moments. Words of appraisal goes equally  to Ole Morten Vagan for his double bass is anchores both the melodic and rhythmic richness of the music, and  Gard Nilssen for his drumming reinforces the music's image, be it lyrical subtlety or thunder storm power.

The more I listen to this album the more I appreciate it. It's modern acoustic jazz with vibrant vibe and intense bite. It digs deep into the music but is far more than academic exercise, it is rather a courages deep dive. It cominbes elegant and wild, it honours the jazz history while looking valiantly toward its future. "Komeda" is an extremelty valuable statement in modern jazz, most highly recommended.