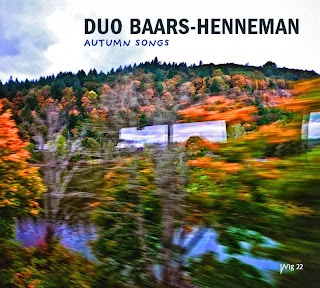 
I've featured on the blog previously two releases by Ig Henneman's sextet ("Cut a Caper"  and "Live @ The Ironworks Vancouver") both great albums with crossing the boundaries between free improvisation and modern chamber music, delivered by a stellar sextet, exploring valiantly the sonoristic and arrangement possibilites of such a group. "Autumn Songs" is played in much more intimate duo setting and it's content is somehow given away by the apt title and the very pretty cover.
"Autumn Songs" is a collection of improvised or, as the liner notes say "minimally composed" pieces inspired by autumn poetry (including poems by Rilke, Blake, Yeats, Appollinaire and others). A sort of a modern chamber music, nimalistic
Autumn may be a metaphore of passing away, but such can occur in a plenty of ways, be it peaceful or tormented.  The music may be filled with sorrow (soft, suspended tones of "The Clouds Go", inspired b Stevens' The Death of the Soldier) but hope and passion for life as well ("Autumn in Maine" with the sparkling harmonies comes to mind). Peacefull and mourning at times ("Winter comes to hush her Song" with the soft shakuchachi breeze) or frenetically dramatic (shredding viola and screaming saxophone in turmoil in "It bends it sways").

The duo's plaiying has a focus on colour, relation, emotion, dialogue. Subtle and understated, this a music for those who appreciate silence. For those who belive less can be more. Last but not least, for those who love the sound viola, crystal, so human voice-like. Ig Henneman once again pours her soul into the instrument and Ab Baars is a worthy companion for the trip, of which my favourite example is "The Heavy Cargo" in which the viola sears through air, the space being organized by the softly repeated phrase on the clarinet.
"Autumn Songs" is music made suited the long evenings, possibly with a fireplace on and a glass of * in hand. Sound to be sipped patiently.

*whatever's you preference. I'd go with a strong ale, possibly a barley wine.