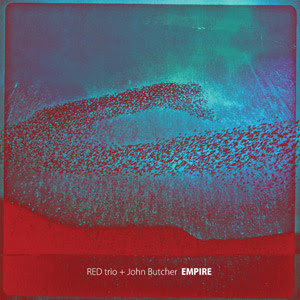 RED trio:
Rodrigo Pinheiro - piano
Hernani Faustino - double bass
Gabriel Ferrandini - drums
John Butcher - tenor and soprano saxophones
NoBusiness Records 2011
A second release by the trio catches them in the company of a british legend of free-improv John Butcher. This expanded version of a trio brings back the memories of their concert in Krakow where they were joined by Keir Neuringer, which is a good thing because that night was spectacular and this trio showed already that they can work great as a quartet.
The RED trio's music features (as they established on the self-titled debut cd; Clean Feed 2010) are dark, eerie, menacing almost as they create a mysterious mixture of shades, scraping sounds, echoes. This is music full of suspense, dramaturgy, a dark and mysterious tale with gripping narration that gradually drowns you. With the assistance of John Butcher they're able to expand and strengthen all those qualities.

The LP (yes, NoBusiness folks continue their romantic crusade against the odds) starts with "Sustained" that gets off the ground hesitantly as the musicians try out the terrain and search for a common ground but soon enough they get busy and cooking, with Butcher's vibrato-laden tenor long notes creating the additional tension between the dense and rapid playing of the trio. A good warm up before the real meal.
"Pachyderm" weighs slowly on you with a myriad of heavy sounds, bass strings slowly disturbed by the bow, so you can hear each vibration of the sound, whirls, clicks and all kinds of (un)natural sounds squeezed in a way out of the saxophone (Butcher's control of his sound, no matter how distorted it is, absolutely amazes) and extensivley prepared piano, metallic, muted, percussive.
The "Empire" occupies the entire B-side of the disc (23 and half minutes long) and is a stunning manifestation of explosive creativity and discipline (the ability to restrain, build, suspend and intensfy the tension instead of simply releasing it is possibly the greatest quality of this band). An expanded noire-narration, split in half by an angular piano solo, slow and grim at the beginning evolving into an amassed explosion of fiery and passionate playing, restless and tricky drumming, angrily struck bass, topped by Butcher's flurry bird-like notes on soprano and gutt-wrenching distorted sounds and circular lines on tenor. Ater a long burning they gradually slow down, following together the round rhythmic and melodic figure that emerged, to end with the just the long lasting reverb of a single piano note.
This music is not 'pretty' nor 'nice' but what it 'lacks' in appearance it makes in the substance and structure. Powerfull, gripping, thrilling, dark and seductive in its own intense way. The playing is fabulous, vigorous, wild, uninhibited. The interplay and the sense of direction is palpable. Abstact and dark, this music engages you completely. A brilliant effort by and for fearless minds.
Autor: jazzowy alchemik o 10:00 AM