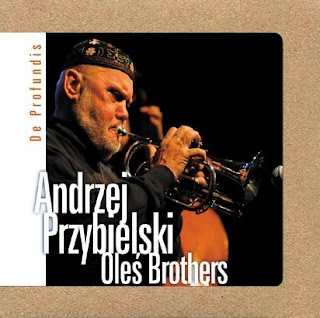 The significance of some releases transcends the music. Such is this case. This cd is, and will be, the last one recorded by Andrzej Przybielski. A true artist if there ever was one, legendary if somewhat obscure character of polish jazz, always underrecorded, never caring much about publicity, recording deals. Hero of whole ton of anectodes, unpredictable musician who would thrive in improvised situations, didn't like the recording studio, hated rehearsals, didn't care about the 'professional' side of music making but lived as freely as free was the music he loved.
Here he's introduced by a Oles brothers rhythm section as they share in the liner notes some the experiences they had with Andrzej Przybielski. He played as a guest with their first band - Custom trio, he recorded with them the first ever session as a leader (released as "Abstract" on Not Two in 2005, he was 61 at that point!). It was his wish to record this concert, while Oles brothers hoped to do a studio session to present Przybielski's new compositions. This, unfortunately, will never be done.

Which makes it only more fortunate that this gig was recorded. Andrzej Przybielski posesses a bautiful, masterful tone, plays with clarity and immagination that is reserved only for the greatest artists. He leads the way with non-chalance, swagger and elegancy. His plaing is passionate, free, wild yet somehow relaxed,  light never forced, never straining himself, yet full of spiritual energy that reminds of Don Cherry. And while the soloing is free, they never loose touch with the melody and rhythm inclined by the composition. And as much as Przybielski plays free-jazz his compositions are just jazz, melodic and simple, filled with jazz tradition. "Afroblue" and "Epitafium dla Jacka" were featured on "Abstract" cd, and it's great to see how creative  is this group as they take the tunes into completely other regions, that's why Przybielski didn't like doing 'takes' - as each song performance would be completey different from another. "Guru" is a bit folskich theme  that was recorded previously by Andrzej Przybielski with Sing Sing Penelope group. The album features also the frree improvisations both entitled "De Profundis". The second one, final track, starts with a ominous, meditative mood (great, harmonical arco by Marcin Oles), ends with "Afroblue", fittingly closing the braces form of this album.
The rhytm section follows the leader without hesitation (liten to them swing in "Afroblue"), providing rich and melodic background (and a couple of nice solos too), but it's the Przybielski's trumpet that takes the spotlight, and his tone is something pure and deep, something to admire. Just listen to his solo in "Guru", or the focused improvisation he leads in the second "De profundis", actually listen to it all.
This is pure and joyfull jazz, free at mind, not something that has never been done before, but on the other hand, something that can't happen too often. I said that some releases mean more than the others for non-musical reasons. It's true that there's a historical value to this recording that is hard to overestimate. This is the final recording of an artist who many will never hear about, yet who could have been now mentioned along the greatest European trumpet players like Tomasz Stanko or Enrico Rava had he ever wanted to take the spotlight. But actually that doesn't add or take from the fact that this is simply and plainly a great music. Enjoy it.

I featured a track from the cd on this playlist.