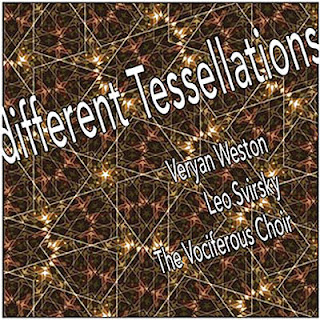 
This release is something very uncommon. Veryan Weston is obviously a very accomplished improviser and piano player but here he presents two extended compositions, and he doesn't even play the piano in here as he invites another piano player to perfrom one ot those, while the other one is executed by an a'capella choir with Veryan among them. The Tessalations are both based on a progression of 52 pentatonic scales, with one note going up by one step with each progression. Sounds quite fascinating and, also, bit scary - as it could easily turn out to be an intellectual and overtly academic research more than a music work. So I have to admit I had my doubts when approaching this cd but they were quickly solved.

Tesselations I is performed by Leo Svirsky, a piano player with classical education and an impressive resume, only 21 (!) at the time of this performance, active also in the field of alternative music and improvisation. The extended performance relies heavily on fast arpeggios, repetitive lines that grow from the exploration of the scales. While Leo Svirsky becomes a co-composer of the piece it is quite difficult to say how much of the music is improvised and which parts are strictly written (or maybe there was just a sketchy outline of how to play the music) but does it really matter?

The shimmering changes could bring to mind serial music of Phillip Glass or Steve Reich but the tempos tend to be much faster than what you'll find in their compositions. Some of the passages are light and charmingly beautifull, soft and dreamingly surreal, mesmerizing, ephemeral, some are thunderous and the sheer virtuosity of this performance (the tempo control, the dynamics changes, the lightness of the touch and natural flow despite the sudden twists in the narration, often going back and forth between impressionistic lightness and dramatic intensity) is really striking and quite overwhelming. There's something hypnotic in a way the scales are built into the lines, the lines get deconstructed to leave space for the new scale, progression in continous process.
My favourite part is in the track 2 (Scales 6-14) when the left hand states the bass line like it was a boogie-woogie piano (although with no syncopation, very rhythmical) and right hand just flies through the keys.
It's some of the most impressive solo piano playing I've heard in a while, in fact it's not only it is impressive playing (which is good) but also very beautifull music (which is better). Due to the limitations of the cd only the half of the performance (scales 1-27) is presented but at 40 minutes I find it a perfect dosage.

Tesselations II shares the same form - which is the progression of pentatonic scales (begins with scale no. 42 to make the whole circle, ends with scale 41) - but is completely different in mood from the piano piece. The composition is divided into three parts (with two shorter interludes between them). The main pieces usually are centered around clear bass line harmony and interchangeable motivs above it. At the top of it you have solo and duet improvisations. You can fear the presence of the vocal extended techniques but actually it's all pretty accessible - the bass lines provide the groove, the improvisations are wild and adventorous but also entertaining.
Grooves and melodies intertwine together, creating colourful and multilayered whole. The overall mood is quite joyfull indeed, bit tribal (especially since the improvisations call upon various folk cultures) and I'm even reminded at times of such artists as Ladysmith Black Mambazzo or Bobby McFerrin. This is fun music really, you start to hum along with those guys while they change the melodic layers in this kind of a musical, vocal kaleidoscope. This is extremely ecclectic, you'll hear africa chants, doo-wop, scat solo, rich classical or jazz harmonies right next to some throat singing or beat-box. This music dances and it does so in a very unpredictable but oh so charming way that makes it even more infectious. Inspiring, very original and a lot of fun (and the choral shout at the end puts the exclamation point on this statement).

Two extremely different performances that share the same form. Two distinctly great musical pieces. One of the most appreciated musical surprises that came my way this year. A brilliant album which I can not recommend highly enough.
Autor: jazzowy alchemik o 12:42 AM