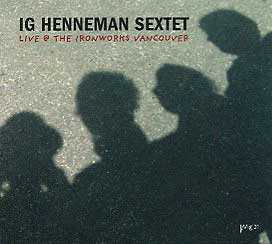 Even if it were the one reason only I just have to put the this one on the blog I praised the previous sextet's release "Cut a Caper" as one of the best albums of 2011. The musicians must have liked the review as it's summary fragment is cited inside the cover of the "Live @ the Ironworks Vancouver". I must admit I felt really proud to see my words printed out. And I feel even prouder having listened to the music they accompany as this is a worthy follow up to the "Cut a Caper" which is a much more important reason to write about this.

The Vancouver concert was part of the Canada Festival Tour, having listened to the stage recording Ig Henneman was pleased with how the band got together on stage and decided to release the material, no edits whatsoever necessary. And one can clearly hear the point in that.

Only one piece from a "Cut a Caper", although it might be seen as the centerpiece, "The Light Verse" is based on a loose orchestration chords and features some impressive solo statements, including whooshing magic by the trumpet maestro Axel Dorner and some blistering notes by the leader herself on viola.

The rest of the album presents the band performing new pieces. Impressionistic melodies, sharp chords and carefull orchestration leave vast spaces for collective and solo improvisation  (listen to the off the hat crazy trumpet - tenor sax duo in the "A'n'B"). More importantly though, Ig's writing finds a way to feature each sextet's member singular voice (as if in the coda of the same track, where each instrument fill a precise space in the harmonic design). "Prelude for the Lady with the Hammer" could prove to be a perfect score a supensefull thriller with its ear-piercing sudden thrills, and tense pauses. "Kindred Spirits" is a beautifully peacefull minimalistic composition, with all the instruments meditating on the same few notes, yet exploring the whole richness of timbral effects (there are some haunting moments as the same notes are passed between the instruments).

Ig Henneman's compositions are not jazz. "Prelude...", as well as other pieces like "Bold Swagger" present a vision of music that yields toward freedom and expressivity of radical improvisation but are born from the classical sensibility of XXth century avant-guarde music, with its intellectual baggage, its love for postmodern speculation, dodecacophony, serial music ecc.
"Live @ the Ironworks Vancouver" takes the best of both musical worlds with staggering results.