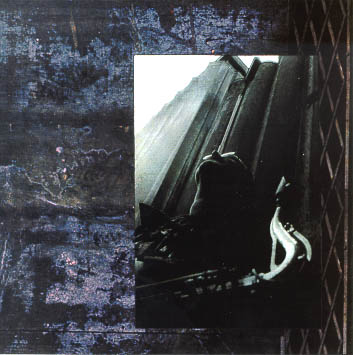 While free-jazz may seem to be all about surprise, even the most radical fans have a list of favourite musicians and it's easier to stick with the safe choices - players that You know can deliver what You want to hear. But then one uses the oldest method available to jazz fans if they want to hear more of their favourite thing - checking out some guys who are playing with guys who played with THE guy on Your list. Like in: I don' know this  band but there's a musician who did something together with this guy who played with Miles Davis. What sometimes can be a misleading marketing trick (happens also in jazz world) does quite often work as the most effective method of finding new names and great music that could otherwise go unnoticed.
What I really want to say is that I've never heard about Luc Houtkamp before, but when one plays with Kent Kessler and Michael Zerang, and You can find Ken Vandermark's liner notes inside*, it's good enough recommendation for me.

This release fuses american tradition of free-jazz and european free-improv culture, an inter-continental collaboration crossing the atlantic bridge. There has always been something so tempting about 'the other side' in jazz history (and in any other metaphorical ways). Many american musicians would became expatriates in various places of the old world, looking for appreciation and, if possible, understanding that they could not find  in the States (somehow the 'new' was always better looked upon in Europe, whether it would be the bebop of Charlie Parker, or the avant-guarde ways of Art Ensemble of Chicago or Cecil Taylor). Plus they would find a whole world of inspiring  classic art, architecture, a world of history that the new world doesn't posses. But on the other hand one could easily risk the thesis that the dream of any improvising musician is to visit and play in America - to be able to touch the roots of jazz. (the whole subject could really use a more profound analysis by a more experienced author btw)
So here You have a sax player from Netherland, highly skilled in all the sonic 'european' ways - multiphonics, split tones, tongue slapping and other extended techniques vocabulary. And two masters of the timekeeeping providing the mythical 'groove'. Obviously a huge oversimplyfication. Luc's playing is both rich in tone and in ideas, and while riding this new time vehicle, he does much more than playing 'sounds', he can play highly rhytmized phrases and he puts a whole lot of passion and some wild abandonment into his lines, moving between the extremes hushed understatement and overblown tones. Just check his energetic flamenco-like staccato riff  line on "Pershing Ballroom Jump" or the groove he plays in the "State Street Blues" (two out of his three composed pieces on the album).
And obviously Kent and Michael can and do much more than keeping the time as they can also provide a whole palette of colours and a harmonic/melodic touch. Check the drone arco bass and metallic small sounds in "Flow Chart" going with and against the tongue-slapped or hissed or whispered sounds of the saxophone. Or the great arco by Kent in "Richard Davis ad DuSable". And while the playing of Kent and Michael (maybe better displaed together in the quartet with Joe McPhee and Peter Brotzmann - another intercontinental collaboration) is not really a surprise, the saxophone playing is quite impressive, maybe because not burdened with any kinds of expectations coming from previous confrontations with the musician. (and while the first impression is already made one can easily find some more informations about Luc's work with the help of uncle Google)
This is not a groundbreaking release, but any fan of free-jazz and free-improv will find a lot to appreciate
here. I'm not really sure which side of the atlantic is pushing and which one is pulling to produce the creative swinging movement but this eropean-american dialectis produces some good results that combines two musical traditions into one.
And a final note. This is not a recent release. But does it really matter? Unless this cd is old news for all of You and I'm the only one who got kept out of the loop :) .
(*I usually try to refrain myself from reading liner notes before the first listen, and try to forget about them by the time I'm writing something on my own, but Ken's observations are so valid that I could not bypass them - in the liner notes You can find his reflections on the atlantic bridge and resulting oppositions)