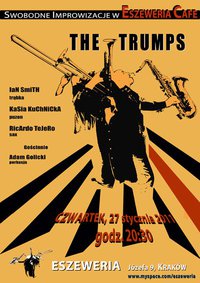 Although they all met each other playing in London Improvisers Orchestra, The Trumps are an international band  - with Ricardo coming originally from Portugal and Katarzyna from Poland. Free improv - connecting people :)
With an unusal line-up they obviously bring an uncommon palette of sounds to the table. First long piece   is mellow, merging all three horns together, sometimes, especially when extended techniques are involved and sonic experiments, making it hard to distinguish one from another. Nice flow of ideas, sounds coming from the distance, from some hidden space, players complementing one another. The new, or at least not so common in so often dead-serious free-improv music, is the sense of humour. At their most searching, probing strange sound territory, the trio sounds light, cartoonish even. Quite often when hearing a spirited sound-games I think of some Tom & Jerry fight sound fxs, swishes, swooshes, clicks and clacks and all kinds of those, the toyish sound of slide flute enhances that entertaining effect. (as John Cage said once - laughter is preferrable to tears; and it's funny looking around at the faces, audience members hiding their smile, not sure whethere it is ok to laugh or maybe this is supposed to be taken seriously)
The second track of the first set was supposed to be "short and loud", but, after initial fanfaric shouts, it turns deeply harmonic and melodic. Nice touch before the short pause.
The second set adds a drummer to the mix (snare drum, hi-hat, cowbell, couple of plates) and it changes drastically the sound texture of the music, allowing for some more conventional, more "jazz" playing with trombone providing often the bone bass structure to the proceedings - sometimes with a robust, expansive shouts of the New Orleans traditional jazz (joined once by great, joyfull solo statement by Ian Smith). The music has more traditional, but no less inspiring feel to it and all players can establish more clearly their solo personality - with a jazz solo by Ricardo being my personal favourite - at one point he introduces a charming melody (during the concert I was sure it was a Monk's tune but now my mind is playing tricks on me and I can't find it) - and he plays it with gently, warm timbre, slowly building up, breaking loose, finishing up with muscular and vibrating tone.
That was a good, imaginative, and surprisingly accessible free-improv, played in front of 20 something strong audience, in a small room of Eszeweria. Maybe not an earth-shattering, mind-blowing or awe-inspiring but this was a very solid improvising performance - an achievement that could get easily undervalued. While I definitely invite you to look up and see those musicians if you have a chance, the most important thing I want to say is - there's no music like live music. Get up and go see some concerts this weekend! I know I'm going to :)