Sainkho Namtchylak, I hope, needs little introduction. Her enormous range and throat singing technique that allows her to use aliquots (Tuva) combined with her artistic sensibility make her voice a tool of limitless expression. Whether given record belongs to folk music, free improvisation (like great records with Evan Parker or Peter Kowald) or flirts with indie-pop electronica a’la Bjork (“Stepmother City”). Sainkho can cast spells with her voice, beginning with angel-like, charming lyricism (high-register, oriental scales, nasal, asia-sounding timbre) ending with wild passion (cries, screeches, clicks, growls). Everything from sounds of butterfly-like lightness to those that (defying gravity) come from some deep, dark hollows, sounding like all kinds of alien creatures (with, sorry for the triviality of this association, Jabba from the Star Wars on the front). Sainkho weaves her shamanic tales not afraid of extreme measures but her voice can also lull You gently and bring to land full of dreams. Her singing is so characteristic, it’s easily the greatest, constant value of all of her recordings (which means also, that if You didn’t like it on earlier recordings, these presented here will not persuade You in her favor either) what is still changing though is the context. Her esoteric, exotic singing paired (contrasted) with various music stylistics and elements can produce effects that are fresh and surprising. This ‘context’ is a key term in case of two recent recordings released (as many previous by Sainkho) by Leo Records. 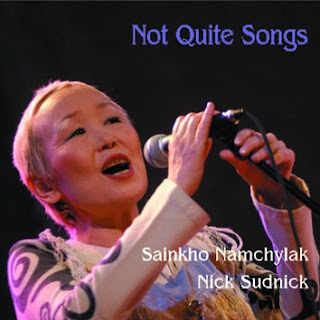 Not Quite Songs
Sainkho Namtchylak – voice
Nick Sudnick – electro-acoustic objects, reeds, accordion, composition
Leo Records 2010
“Not Quite Songs” is a duo project – Sainkho sings (although this term seems inadequate to describe the phenomenon presented), Nick Sudnick uses instruments of vast variety, constructing electronic loops as playing on live instruments. As the title suggests, those are ‘not quite songs’, but songs nevertheless, short and focused forms (between 3 and 6 mins, 15 numbered tracks entitled “Play”). Many will have trans groove, bass lines and quirky rhythms that remind me of some works by Tom Waits, though this association is very loose, similarly to remembering some of the world music fascination sounds presented by Peter Gabriel (“Play 13”). Other “not quite songs” are full of slowly sounding off gongs and strange eerie sounds, as enigmatic as the description of instruments played by Nick Sudnick is (see above). All those entangled sounds are completed by Sainkho’s vocal shamanism, menacing or lyrical, contrasting or blending with the instruments (voice and some string instrument in “Play 5” are hardly recognizable from each other, or for that matter, as voice and bowed string). It’s tribal, hypnotic, the modern appeal of the music doesn’t change its primal, ritual character (listen to mechanic, industrial noises of “Play 6”). This music is full of pre-civilized world, magical order, combining ancient and modern, meditative rhythm-less fluency (“Play 12” with its ambient-like soundscapes) and trans-hipnotic groove, avant-garde electronic with ethnic instruments, computer-created frames sequences with unpredictability of improvisation, nature and culture. I could go on with this kind of dichotomies so to make it short: treat for everyone who, like Sainkho, likes to ‘travel between the words”. 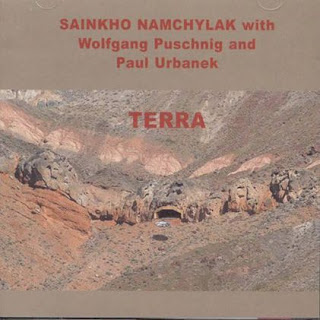 “Terra” was recorded by a trio (names above). Project’s idea was to present Saikno’s singing in suprising – mainstream context (not that the trio’s instrumental setting is typical but playing is definitely mainstream). Her orient melodic lines interweaves charmingly with piano (that unfortunately sticks to backup role, sometimes with romantic tinges, other times with this late night piano jazz club feeling – eg. “Terra 4”). I can easily pass by the bit hackneyed  piano playing (bluesy phrases and bass walking of left hand combined with vocal acrobatics by Sainkho can still create intriguing whole). The album though is ruined in my ears by Wolfgang’s playing. While the flute completes nicely the ethnic features of “Terra 1” or “Terra 2” (contrasting with piano), the tone of his sax, almost every time it appears, beginning with third track (surprise surprise – “Terra 3”), just brings the whole thing down, sweet, sugary, smooth, no risk, no claw, sound of soul-jazz filtred by pop world music (especially “Terra 3” and “Terra 5”). While Sainkho’s singing remains strong, the music is too close to soothing, melodic triviality. Initially intriguing setting of ethnic voice and melodic accompaniment (like lullaby intro of “Terra 5”) doesn’t hold for long, it’s all nice, and pretty but, after couple of listens, also tiresome. The album is uneven and, unfortunately, not very successful – fans of Sainkho will probably be put off by the whole sweetness, those looking for smooth will be put off by some of her more adventurous vocal escapades.
Fans will probably want to check both releases but I would recommend only the first one to more casual listeners.
Autor: jazzowy alchemik o 11:26 AM