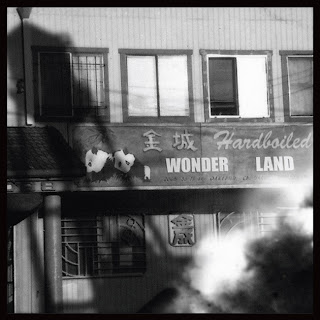 Hard-boiled Wonderland
Vijay Anderson - drums, bowls
Sheldon Brown - alto, tenor, soprano saxophones
Ben Goldberg - clarinet, contra alto clarinet in E-flat
Ava Mendoza - electric guitar
John Finkbeiner - electric guitar
Smith Dobson V - vibraphone
Not Two 2010
(since this cd appears on 'my favourites 2010' list I decided to get back to the review originally published at magnetoffon.info, below You can find the english text)
Vijay Anderson, the instigator of this project (although he calls it an 'egalitarian venture') combines two trios he is a part of : Vijay, Ben, Sheldon (drums, sax, clarinet) and Vijay, Ava, John (drums, two guitars). To complete the overall sound Smith Dobson V on vibraphone joins the ensemble. Thus the basis of this one is a double trio, a group that draws equally from the tradition of Ornette Coleman Double Quartet as King Crimson's double trio experiments from the mid 90-s. The music was completely improvised, wth the line-ups changing for most of the pieces.
I have to admit, ashamed, that I'm not very familiar with some of the names in this band. Vijay Anderson can be heard on some albums by Adam Lane (fantastic trio dates with Vinny Gollia for CIMP, as well as the first Full Throttle Orchestra cd where John Finkbeiner also plays). I associate Ben Goldberg with couple of klezmer Tzadik releases (*at least I did so when I was originally writing this review). And that would be pretty much it. Which makes the music on this release even a bigger surprise.
The sonic palette of the whole sextet is impressive, travelling freely between worlds of postrock and postjazz (whatever that could mean). Gently weaved sounds create dreamy visions, walls of sound, palpable yet thin and almost transparent. Everything is volatile, with new layers constantly appearing (first track contains some overdubbed guitars and gongs) just to disappear in a moment, leave space for new waves, new sounds coming. Full of different misty spots, like on gloomy impressionistic landscape. You won't find here any classic jazz (or rock) soloing and while the playing is amazingly free and spacious, there is also an incredible sense of self-temper and discipline. Group playing that using modest means, without any wild cavalcades and boiling culminations, manage to creata a constant, misty, intriguing tension.
You can view this band also as a 'triple duo' (two reeds, two guitars, two percussion instruments) and (bit paradoxically) the tension is created when two from the same pair meet or confront each other, which is even more apparent in the pieces played by smaller line-ups. With two instruments playing a dominant part, the music moves between the rhythmic counterpoint (like clarinet playing rhythm base in low register and saxophone building with fluid lines on it - "A Few More Hands") and harmonic interplay (same track when the vibraphone takes over the rhythmic base and two reeds can engage in intervallic dialogue). Good example of this 'meeting' and 'confronting' duology is "Dilation", the only quartet of the album (guitars and reeds) with melodies constantly interlacing, entwining or cutting each other (imagine the spiral structure of DNA code), with contrasting chords keeping the suspense in control. And when it seems they gather enough speed and volume to explode, instead of culmination, slow and gently decrescendo gesture arrives. One could analyze each other track but I will just mention also "Nix" (tenor, two guitars) where You can hear clearly two guitarists playing with and against each other, and, while it's generally impossible to tell one from the other in the course of entire album, their contribution to the sonic palette is crucial.
The constantly changing line-up gives You variety, the common attitute towards improvising gives the sense of unity to this project. This music would be great for a movie, preferably noir genre, black & white film, with action not very dynamic, but slowly evolving and full of suspense. And add to that some psychodellic elements (eerie guitar sounds, foggy vibraphone) of dreaming awake. This dream and the suspense is ended by aptly titled "March at the End of the World" with somehow apocalytpic and twisted swing section, the only track of the album that ends with strong kick on the drum (all the other ones rather die slowly off with last sounds echoing in the silence). Just a musical way to tell You "Wake up!".
ps1. The titles of the first and the last track of the album (first one being also the title of the album) reference the writing of Harumi Murakami - novels "Harboiled Wonderlad" and "End of the World"
ps2. As it happens a lot with "double" ensembles the stereo channel division gives uncommon sense of space in the music and makes for a great listen on headphones.
Autor: jazzowy alchemik o 4:25 PM