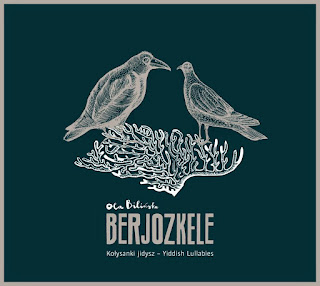 
I have recently written shortly about Berjozkele's concert during the Jewish Culture Festival and I promised to write more about the group and their music, available on cd thanks to the support of Jewish Historical Institute. Bilinska's project is in fact of great etnographic, historical interest, in many ways a dive into the past. The album is a collection of yiddish songs of yonder times, before the tragic disappearance of jewish culture in Europe. Thankfully, it's not only a recollection of a lost culture but a modern interpretation of it, an example of its recent revitalization. The presence of Raphael Roginski and Mikołaj Trzaska on the record is somehow symbolic, given the two are greatly responsible for the phenomenon of polish new jewish music.

Berjozkele's music, however, is not only a journey into the past. All the songs are connected by the common theme of night and dream. It's a collection of lullabies, songs that dwell in-between the light of the day and the pitch dark of the night. On the border, following the fine line between real and surreal, tragic and comic, a dream and a nightmare.

This is apparent in the musical narration - hauling clarinet, slow tempos, long, suspended tones with plenty of reverb, echo. Musicians do an excellent job of enhancing that surreal atmosphere of suspense led by Bilinska's hypnotic, haunting vocals, quite often filtered through echo and delay effects as well on its own (ie "A jingele, a mejdele" where a few loops create a multi-layered effect of a small choir).

The last two songs on the album represent perfectly the emotional and narrative scope of the whole album. "Di Berjozkele" (Birch Tree) is a tragic and sorrow tale of immigrant in the new place, the story sung for the most part a'cappela, with the vocals augmented by a lot of reverb and echo, which creates an impression of being lost in a vast open space (the eerie, sci-fi synth adds to the effect).
"I have come here all alone and from a distant land.
Alien is you God to me and foreign is his tongue.
He won't understand my words, nor will he see my sorrow,
even though I pray so hard, as ardent as I can."

"Sztejt in feld a bejmele" ("In a Meadow Stands a Tree") is similarly minimalistic, with the Bilinska's singing surrounded only by sounds of cicada's, hooting owls, frogs and other night creatures that all calm down as the warm, enchanting melody lulls them to sleep"
"On the branches, long and green,
All the birds are fast asleep.
Their mother's singing: a-a-a
It's such a quiet night, a-a"

Yiddish lullabies by Berjozkele are oneiric, magical stories of joy and sadness. Let yourself get under their spell.