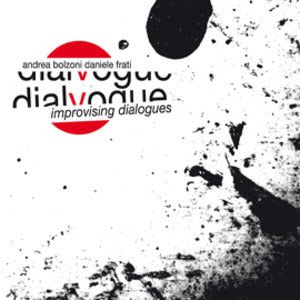 
Both Andrea Bolzoni and Daniele Frati are part of the Swedish Mobilia trio whose album "Knife, Fork and Spoon" I found to be extremely intriguing example of post-rock improvisation. "Dialvogue" strips down the music to the duo, leaves away the massive sound of the heavy rock and leaving the two musicians to create a very etheral music.


The "Dialvogue" are mostly short pieces, improvised sketches. The cd starts with brief and wamly melodic "Reunion" that shifts into "Disagreement" where simple guitar chords get swamped in an electronic sauce. The music is filled with psychodelic echoes and tense suspense. Strange and intriguing. Slightly psychodelic. Take the sci-fi sounds swirling eerily round the echoing guitar chord in "Pink Thoughts".
The percussion based pieces such as the short sketch "Surgery Room 1 : Rebellion" substitute the spaced out electronics with tricky rhythmics and a nice feel of immediacy and surprise. "Interestellar Dialvogues" clocking the 11 minutes is the longest track of the albums and merges nicely the two approaches.
Throughout the album the duo creates an array of surreal landscapes, absurd yet captivating images. Such as the most gentle acoustic guitar in "Butterflies" surrounded by a variety of electronic insects or similarly lyrical "Inhale Exhale". The maddening trickey of the "Surgery Room" cycle. The distant sound of guitar interrupted by white-noise whispers in "The Breack Up Message".

A set of very intriguing music that is surreal, psychodelic, hypnotic, eerie. Immaginative and subtly understated. A good kind of strange.