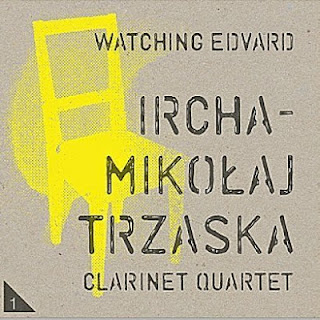 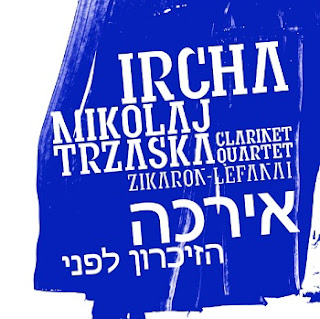 Ircha Clarinet Quartet is truly an unique band. I wholeheartedly reccomend their first cd "Larks Uprising" recorded with Joe McPhee, but it did not really represent the band's music as it really is. The Quartet share double musical interest, first of which is the ritual jewish music heritage, secondly each member of the group compose their own music for the quartet and those compositions, delicate, poetic, minimalistic share the qualities of modern music by the likes of Steve Reich or Philip Glass rather than jazz or klezmer.
The Quartet second and third release present together an honest picture of the group's musical vision as the first cd "Watching Edvard" showing their "modern composition" side and the latter one "Zikaron Lefanai" focusing on their interpretation of the jewish heritage. What remains intact through the two albums is the band's wonderfully unique collective sound and sense of unity.

I had been amazed by the group's live performances on few occasions, I'd like to recollect some of the words I've written upon one of those (the original,complete text is here):

Ircha's connection to this (jewish) heritage was strong from the very beginning, as they seamlessly forge improvisation, modern composition and some of the oldest jewish melodies.

The clarinet quartet (with occasional duduk or fujara in the mix) sounds full and complete and quite unique. The level of structure and sense of direction in their playing absolutely compelling, they pass the fragrant melodies between each other as they form a soloist - choir roles, or a double duos, creating on the spot almost transparent arrangements in the way a 4-voice vocal ensemble or a string quartet would be set. With a rhythmic line in the bass clarinet, a repetitive chord structures, a clear line of ancient melody soaring over, transforming into an succession of everchanging minimalistic melodic and harmonic patterns.


And in the music there's the entire history of God's Chosen People, the sorrow disonance of banishment from they Egypt, the whispering doubts of perennial wandering, the cries of wrath, the joy of celebration and finally the inner peace found everlasting faith and hope in search for the Promised Land. This music reaches out of the space and time.

There's a purity in this music, a crystal clear construction that might be unusual considering what Trzaska or Zimpel usually play, the modern compositions, plays on serial changes, minimal harmonies flow into some of the oldest, cerebral melodies known to the human culture, intensified by the spiritually inspired playing, the ethereal emotional quality. Ircha Quartet does not play religious music, but there's a religious dedication and passion to the music they play. And within all those contexts, moments of staggering, exhilirating beauty appear.

Do I have to add that both albums are recommended? Ircha's music is an act of inspiration that transends musical genres. A musical treasure.