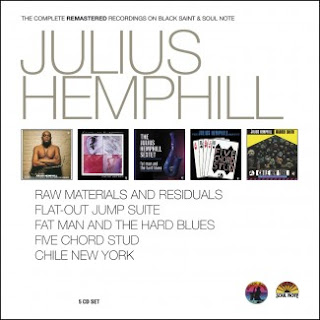 The Complete Remastered Recordings on Black Saint & Soul Note is a great series that brings some of the classic and long unavailable music treasures from the vast catalog of two classic italian labels that played a major role in documenting the american jazz music of the 80's and 90's. I wrote before about the series (David Murray Octet box) and Julius Hemphill release is a good opportunity to remind you about it.

Julius Hemphill, a founding member of the famed World Saxophone Quartet, but an under-appreciated leader on his own, is to be considered one of the key figures in the evolution of jazz loft era in New York and the recordings compiled in this box set show pretty well why.

The key figure to the first two, loft-era recordings is Abdul Wadada, his cello's swift notes give solid rhythm and harmony foundation but, given the higher register of the instrument, keep the music light and gracefull. The "Raw Materials and Residueal" starts with contagiusly swinging "C", melodic theme is spread wider and wilder as the trio digs deeper into the piece, the wild sax solo though never looses the sight of the bluesy core of the melody while the crazy rhythm section never looses the pulse. The remaining pieces of the album explore even more intense, sharper sonic regions, combining the fierce rhythmic attack with melodic tunes and sudden direction twists.

"Flat-Out Jump Suite" begins slowly with "Ear" (delicate flute notes, gentle percussion touches, suble cello chords and pensive trumpet). The "Mind" is equally pensive, filled with abstract colours and suprising tones. The second part of the LP is quite a change of pace: the rhythm section is furiously and freewhellingly swinging along sax and horn soloing along wildly in "Heart". Finally you get the irresistible funk groove of the "Body" (sharp, pizzicato notes on the cello, fat drum beat and both horns just laying the groove with a swag over the place).

The last recording of that era, although published only in 1998, after Hemphill's death is a duo with Warren Smith, a sonic environment sculpture played in the reverb-filled space of the Jeff Schlanger sculpture-installation. The recording documents the spirit of the era, an example of a liberated multi-arts performance, burdened with political commentary artistic act of social responsability. It is all reflected in the abstract yet emotionally charged, mournfull music - a flowing myriad of tuned percussion, cries of saxophone, and sorrow moans echoing around the walls

The final two recordings were done after Hemphill exited World Saxohone Quartet. The Sextet's recordings are bluesy, gritty, spiritual and joyfull. There's the primal passion that reminds you of the root blues recordings. Lushfull at times but strikingly vital for the most parts, the music tells the jazz history, from negro spirituals, through Harlem jazz, swing, R&B music till the AACM and loft-era free jazz. Both brilliant albums show clearly that Julius Hemphill, a great saxophone modernist in his own way, was truly one of the few great composers of the jazz avant-guarde. His ill health stopped him from playing on the "Five Chord Stud" session and he conducted the recording. He passed away year and a half later on 2 April 1995 in New York.

As made already standard by the series the "physical presentation" is rather modest - a carton box  contains paper sleeves replicas of the original LPs. While the economic packaging might leave some  to desire more (why aren't back covers always reproduced?) and one misses the original notes (not to mention photos or any extra material) the remastered sound as well as the high quality of music makes virtually any release of the series a bargain steal and Julius Hemphill's box is a perfect example. If you have none, or maybe just a pair of the albums presented in the box - here's your chance to get some fabulous music at great price.