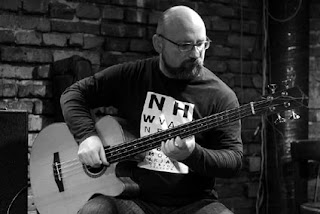 I hope you have already read the first two chapters of the interview in which Rafal tells the story of his musical roots. With the third chapter we reach a part of our conversations in which Rafal explains the essence of his views on the art of improvisations:

(you often define improvisation as an action rather than musical performance, can you elaborate on that?)

Improvisation is not exclusive feature of a musical activity. You can improvise in any field of life. It is a model, a way, a strategy of action. For improvisaition to take place some requirements have to be met that are not acoustic-related, that are not "musical". Learning how to improvise does not happen through learning sounds. Those are merely the effect  of using the method of improvisation. But this method, and its requirements are equally valid for a dancer, poet, painter, musician or anybode else. Such a requirement is the ability to perceive the reality and react to it. If’d have to describe the improvisation I’d say it’s the art of a deep insight into what’s happening and quick reaction.

My personal inspirations for this methodical and theoritical approach towards the improvisation are rooted in philosophy of Far East, european tradition of thinking does not provide tools adapt to theoretise and perfect this kind of activity. According to our culture, improvisation is always connected to inspiration, it’s an effect divine intervention. You’re taken by a "furor poeticus" and you don’t really know what’s happening with you. It’d be hard to perfect e method of taking the advantage of divine intervention, men have rather little saying in this field.

So that art like this could be made one needs to enter a particular stare of mind which chinese call „wu xin”, it means „no mind” or „empty mind”. One can’t think in speculative, computive way, mind should completely transparent – which is yet another metaphor of chinese language, a characteristic which makes so difficult any translations into an european language.
The sense of this metahaphor refers to cognitive structures. Human mind, in the process of educations, becomes structured, it learns cognitive patterns that make it possible to categorize the reality and function in it accordingly. The negative effect of those structures is that they determine our perception of the reality and everything which does not fit the structure is eliminated and ignored.

In the case of music such structures are the same thing that Boguslaw Shaeffer called „listening habit” – if your ears get used to a notion of music as a very specific kind of sounds organisation, any other way of organising the sounds will be perceived as bad music or not music at all.


(such as tonal major/minor systems?)

Exactly. Majority of the society is still used to music functioning in the major / minor chords system, whatever eludes this classification is not music anymore. That’s how people find it difficult to absorb the XX century avant-guarde which, ironically enough, is hundred years old god's sake, it started by Schonberg's experiments with atonal music and dodecaphony. Those are merely different systems of sound organisation. And yeat there are many classically-trained musicians who don’t consider this is music enough.

Chinese people say then: if we want to act in the real time, especially if it’s an act of co-operation with other people, where there is no planning before-hand, we can’t look at them through the filter of our own cognitive structures as we might easily miss some part of their act – after all, they probably use different  structures themselves. To be able see the big picture we need to have a method of thinking and acting outside those strucutres. This means being able to achieve a state mind of which allows us to see the reality in its natural flow.

„Wu Xin” is obviously not a state of mind one can enter at any given second although some pharmacologic substances might help, large quantities of alcohol to begin with. Those are the moments when, under the influence of chemical reactions, we let ourselves loose, the cultural corset is cast aside, and suddenly we come across a brilliant idea. According to our euroepan ways this is effect of inspiration or drugs. Chinese did not have the notion of personalised God or divine intervention and they thought of a different explanation – state of empty mind.

While pharmacologic substancies might help us to step outside our habitual ways of thinking and acting, they can’t provide what’s crucial to the „wu xin” and its effectivness . We could a call it a particular „presence of mind/consciousness” or „attentiveness”. In the spotaneous, group improvisation it’s crucial to be able to see sharp and clear  our partners. Our own actions depend on theirs.

Acting under the influence of „furor poeticus” or chemical reactions, makes as act as „divine madmen” which means we do have access to a different way of perception but I have strong doubts whether this perception gives as a clear and true picture of reality. People in such state are often self-focused, withdrawn while I think that an improviser should really focus other musicians.  It can’t be done without the said „presence of mind” or, as martial arts trainers would say „attentiveness”. The state of mind is the key to it.

Today it might be all somehow obvious, neurophysiological tests prove clearly enough that artist's mind functions differently in the moment of creation. I found out about this because of Far East philosophy and I’m trying to applicate it to what I’m doing in music.