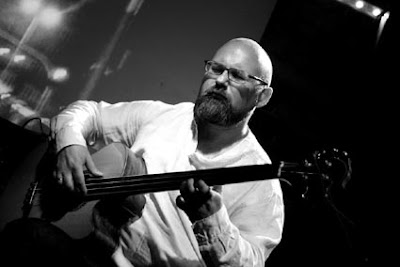 Here's the last fragment of the long conversation with Rafal Mazur, a furthermore insight into personal philosophy and conception of improvisation.

I'd like to say thanks to Rafal for the time and thougts he decided to share.
(in this as well as in previous chapters you can find linked some of the net-labels releases which mean you can legally and for free download some of Rafal Mazur's music)

I’m trying to find the method free improvisation,  having a method means knowing what conditions are necessary that so it would be a conscious activity, which means one can practice it and selfi-improve through practice. Improvisation should be casual or accidental. It can’t a resultant of mood, weather, emotional state and son. I’m talking about the whole process, to begin with the ability to listen, through the reactive mindset and instrumental agility included. I’ve this idea to make a group that would be a sort of workshop, a laboratory of improvisation. I think improvising is a skill, and as such it can be perfected.
I’m talking with many musicians about this and there’s a very positive feedback. I’d like to be able to practice improvisation so it would go to a „higher level”. I’d like to strip it from this mysterious and magical „aura” a bit.


I remember a workshop for spontanous improvisation I participated in Strassburg, they were led by Mark Foltz, a brilliant clarinet player, but it was a really about plaing in a chamber group, it did not touch the phenomenon of improvisation itself. We were shown and explained how to play in a group, how to listen to others – and obviously these are extremely important elements of improvisation, but they’re non sufficient. You can’t lear to improvise that way, you’ll just know how to play not overtly loud so to not drown out your colleague – and that’s not what’s it all about.
Those skills are really the elementary of any musician, I think that to play improvised music one needs to be a skilled musician, I wouldn’t say an institutional education is required,  but the elementary needs to be covered.
Improvisation is for artists who not only have mastered the instrument but have a rich musical experience,  such musicians have also vast easthetic horizons and do not focus (as is typically a novice attitude) on one and righteous genre of music. I don’t how it is with other musicians but for me a moment came where I’m no longer interested in particular music styles but rather in its total picture. I played many musical styles in my life and that’s how I discovered the natural need for improvisation. Freely improvised music gives you a chance to participate in musical performance that is completely unpredictable. Especially if it’s the first meeting. Unbelievably, huge things may happen. My collegue, Yourij Yaremchuk, great sax player from Lviyv said that to me  „Rafal, I’m only interested now in music that is unpredictable”.  And so am I.

The Question and the problem is – what to so that your actions would be authentic reaction to what you’re hearing, rather than executions of standard samples you’ve recorded in your mind. The level of improvisation we’re talking about requires that those mind habits would be abandoned, otherwise we’re just playing so-called patterns trying to fit, for better or worse result, within the puzzle at hand. I’m looking for the moment, and I know it exists because I’ve experienced at least couple of times, when you start doing things you never have practiced before, you didn’t even knew you could play, that you don’t know where they are coming from. This the state of mind that Chinese are talking about, stare of spontanous reactivity and pure creation.

(after all, the dangers of „pattern – playing” is a factor equally present within the mainstream jazz or free improv idiom...)

This problem occured at the very beggining of this music. Many people think free improv is a music style. Derek Bailey in his book about improvisation talked about the problem of „cliche’”, it results from our model of education, it’s the identical in all fields – imitate the masters. In the case of improvised music, if we define improvisation as creative method and the music that was created, learinng to imitate acoustic solutions applied by Derek Bailey or Evan Parker does not lead us to the method which brought them to create those sounds. It’s not about playing some overtones, some shrieks and other weird stuff [Rafal imitates dynamic sax playing and complex guitar line]. Those do need improvisations to be played, one can compose those sounds and they will as well. But when Derek and Evan played duo, those sounds appeared in given instance because their were resultant of a present situations and reciprocal reactions. That’s the thing [the ability to react] we need to learn, not cliches of ready-made sound solutions.
The second problem it poses is this – how to forget about cliches but not loose the skillset we acquired by practicing those. Learing comes through repetition and it’s necessary to learn the instrument. You can’t learn to play without practice. You develop your musical and instrumental skills from the very basic etudes.  Many people think you don’t need to know the instrument to be able improvise, but they’re limited to the point that at 10th gig they’ll play exactly the same things because they’re physically unable to play anything else.
As you practice the instrument you acquire the skillset but you record the musical structures in your mind as well. You need to forget those without loosing the capabilities they help you get. Taoists have a name for that – „sitting in forgetfullness”. You empty your mind, but you’re still able to call upon any skill necessary as you react to the surrounding circumstances. Sounds strange and mysterious maybe but it is a method used for hundreds of years in martial arts. It’s not enough to understand it, it takes years of prace. But once you can „sit in forgetfulness” and clear your mind you have a clear vision of world, which allows you to be equally spontanous as well as effective.

This is perfectly understandable. But we’re often looking for the kind of wisdom pills and we think once we understoond something we know how to do it. All those things are very basic and simple, by they need years of practice and it’s clearly said „those are simply things, but they need to be repeated for a long time”. This sentence ends nearly each chapter of „The Book of 5 Circles” by Miyamoto Musashi – japanese master of sword.

I’ll get back once again to martial arts which for me are the arche-type of improvisation. Only in
XXth century in China it became customary to challenge somebody before a fight. A warrior in China or Japan had to be ready to fight at any second. Beside the fact he had to learn to control his body, he had to have a complete insight into surrounding reality, so he’d able to see the attack coming from any direction. This a matter of life and death, not a bad or good performance. The method of entering a state of mind that allows to perceive the reality without any tension and react immediately to any change is a crucial part of martial art training. Musashi, who was also a buddhist writes again about it : these are simple things, but they need to be repeated for a long time.
This is why I am thinking about a workshop project where we could train and practice improvisation. My personal belief is that the quality of the music played on the concert reflects the quality of our improvising skills, not merely the musical skills which have to be there as well and there’s no doubt about it. The sum of all those skillsets will result in good, even great music. Music that will give an easthetic satisfaction to the listener rather then confuse him so he thinks „they’re probably improvising right now because that guy doesn’t really know what’s going on”. It happens, musicians play improvised music  and each one is doing his own thing, it’s a cpmplete chaos and everyone explains „it’s chaos cause it’s improvised so it should be”. I object to what many people, including active musicians, think – that if you’re improvise, sometimes you’re lucky and it is ok, sometimes it’s not. I believe it has to be good every single time, as long as we work on the quality of our improvising skills.
I remember this theatre anecdote. There was this play one actor had to shor the other on stage, but the prop gun didn’t fire. And so the shooter, instinctively, kicked the other in the butt. The victim reacted immediately „Alas, this shoe is poisoned!” and dropped dead. An absurd scene, but this saved the performance. A good improviser can react in any circumstances so it seems the situation was staged.
Keir [Neuringer] told me once that „good improvisers play the music that seems (partially) composed”. This music has to make sense. European tradition would attribute it a previous thought. If you’re painting a Sistine Chapel you have a draft. We do it differently, but the result has to be the same. You can’t say „this time it didn’t work”. There are no excuses. You can do music of different quality, the method is different, but the quality must be the same.
A really good improvisation  brings even more substance, „meat” to the work of art. There has to a harmony to it, generally speaking. The work of art should be complete, that’s what we strive for.

Improvisation as a valid and independent creative method appers only in XX century. Stockhausen talks about „intuitive art”,  about „non-thinking”. But there is this thread that goes throughout the entire history of art. Commedia Dell’Arte, before that, beside Aischylos, there were always street performers, theatre companys. They never had their lines, they knew the subject, but the details were never set. Yet they performed with such passion that the audience loved them. I believe that nothing can carry and hide as big emotional charge as  improvisation.

Yet it is an art, to be able to work with others, to not stumble. If you don’t connect, the discord is immediate and such that would never appear in composed work of art. Improvisation magnifies all the effects. If it’s good – it’s like reaching Mount Everest. If it’s bad, your all the way down in the Mariana Trench. And that’s when the listener begins to wonder „what for?”. A good collective spontaneous improvisation leaves no such questions behind.