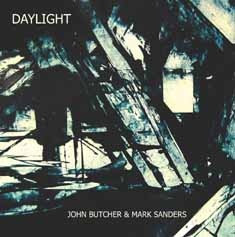 I have mentioned on many occasions that sax - drums duos are among my favourites, the most basic vehicle for the punch and kick - melody and rhythm, seemingly limited measures for unlimited purposes. You'll be hard put to look for any basic rhythm and melody on the recording did by two mainstays of british free improv scene - John Butcher and Mark Sanders.

Instead you'll hear the sax whisper, flutter, cry, wretch, tick. You'll hear the gong notes travel trough space and time, suspended in the air. You'll hear two instruments playing one along the other in parallel universes where it seems their nature is the same and their sounds can't be told one from another. The half-hour "Ropelight", recorded live at London, feels at times like a surreal nature walk, everchanging and everdifferent, you'll hear insects, birds, it will seem you hear the single-cell organism moving and acting their own little ways, with gently evanescent saxophone vibrato and brushed percussion in the end, working slowly to gain its power and momentum, to build tension that resolves in high voltage fire-music crescendo and ends in a single soulfull saxophone phrase.
The latter half of the cd, comprised of "Flicker" and "Glowstick", recorded at Southampthton reveals another words of possible sonic explorations in textures and harmonics and otherwordly sonorities. Butcher's ability to squeeze out of the horn unexpected tones is awe-inspiring as he doesn't segregate rough and edgy from smooth and delicate, trying to encompass as large easthethic territory as possiblem, Sanders agility and promptness is equally unmatched as finds myriad of ways to imitiate, duplicate, counter-point, follow and stimulate the music through entire arsenal of singular strokes of brush, small objects. There's an unbelievable passage in "Glowstick" Butcher charms with the circular breath creating an intricant instant rainbow-like harmony (as if distilled through the moment) while driven by the unstoppable pulse of metallic and tiny ticks of the drums.

The main object of this music is to look forward, never stop, never satisfy with one idea, but be able and willing to abandon it as soon as it seems fixed and (even before it seems) finished. And this readiness to abandon completely themselves in the flux is what makes those musicians masters of the so-called improvised music. To listen to those two follow each other into the abyss of possible notes is a challenge, but no risk no fun right? As far as creative music goes, the joy of discovery is strong with this one.