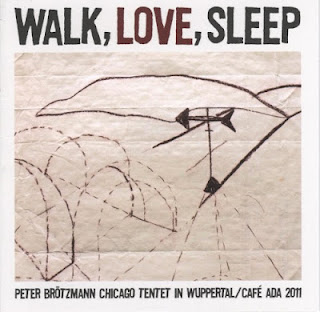 Chicago Tentet's music is an experience unlike any other. It is indeed a gathering of who's who in avant-garde jazz scene, although one shouldn't think that music works like an all-star weekend team. Over the years the band developed its sound and ways of collective improvisation that relies on telepathic levels of communication and interaction.

Walk, Love, Sleep is a double album that presents the Tentet's concert from the 22 of april 2011 at Cafe Ada in Wuppertal, the performance being a part of a tour for leader's 70th birthday celebration.

I don't think there's any need to dissect the pieces here. There's raw energy, there's the massive sound, the sky-is-the-limit outbursts of sounds, there's an irresistible groove, the chaos and the order constantly emerging from one another. There would be many ways to listen to the 45 minutes track. One could admire the richness and the variety of all the instrumental settings (the 3-reeds unit Sonore starts the evening, there's a brilliant brass section, or the ferocious baritone sax slaps dueling the distorted  cello strings). One could admire the variety of the story's chapters on emotional, dynamic  levels. Or the musical prowess of the musicians - the crying tarogato, the brutal baritone, the skyscraping tenor, the muscular bass or hard-hitting drums. Or one could get lost trying to do that and decide to just listen and follow and stop asking questions. You can trust those musicians.

There are moments where the raw, bare energy is impossible to contain, as well as those where the nature shows its inexplicable, fragile beauty. I could tell you some of my favuorite parts to the minute but you should rather find your own.

Last November, short after yet another tentet's tour in Europe Peter Brotzmann announced that the project is, at least for the time being, on hold. Not only the economical situation makes it impossible for the band to exist (such a statement could be easily made during any of the 14 years of band's existence - after all the Tentet existed despite any possible rational and economical thinking). It is the artist's opinion that the band have reached for now its creative peak and the risk of routine killing the art appeared.

Sad news maybe, although the creative energy will find its outlet anyhow in other projects. But when Peter is saying that weekends in London and Wuppertal presented Chicago Tentet at the peak of their creative form, he's got a point and " Walk, Love, Sleep" backs up this statement. Spectacular free-jazz feast.