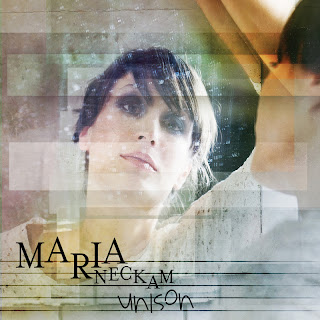 This is a big change of pace considering most of the cds presented on the blog - a vocal album, a collection of songs (melody, lyrics and all that jazz) in the company of all the free around might seem a bit surprising, but this cd deserves a recommendation for the simply fact of it presenting good music.


Maria Neckam's voice is clear and crisp, pleasant to listen to, the real treat of the album are the compositions and the way she treats her rule in the song. The songs are melodic yet filled with surprising harmonic solutions as well as intervallic jumps, in fact the voice is treated as an instrument and its lines are always in clear relation to those of others present. It vibes in unisono with guitar in "Obsessed" as the sudden jumps of melody reflect well the title. It resonates delicately and softly against the cello's counterpoint line in "Where Do You Think You Will Be" (an absolutely haunting duo-only piece).
The title track intro charms with the repetitive lines and harmonies sort of a musical box, the melody might seem a bit melancholic but then again there's this particular moment of melody that feels like a warm and a heartfelt smile. The track also features the entire horn section and brief solos that complete each other like hand in glove.
"Unavailbiltiy" features only the piano accompaniament and is beautifully fragile. On "One Day" she sings along the bass "There is hope in the eyes of the stranger", "Solitude" features the voice and the two saxes. Maria Neckam not only is not afraid of unvoncentional and risky instrumental, layering subtle harmonies, but she's also willing to strip the melody bare and create is as pure as possible, in all its lyrical, poetic, nostalgic appearances. As in the second cello duo on the cd "You Will Remember" (P. Neruda's poem) where the peacefull melody resonates with happily against the fragile arco.

Brief and modest instrumental solos might reaffirm us in the belief this is jazz album, the unconventional arrangamentes and melodic jumps might be the other factor but the cd would fit as well in the "adult pop-rock" category (let's say like Tori Amos). After all, Maria Neckam is first and foremost a songwriter*. A rare and under-appreciated role in the world of modern jazz and one that demands integrity of artistic vision.

"Unison" is a collection of songs that work perfectly on many levels. Enchanting melodies, haunting harmonies, poetic lyrics, beatifully played and sung. Never overdone, it leaves just enough unsaid so the poetry wouldn't be ruined and mystery would remain. This cd grows on you, slowly, yet inevitably leaving you enchanted.

* Maria Neckam wrote both the music and lyrics (equally great). The exceptions to the rule are the poems by Hafez, R. M. Rilke and P. Neruda.


unfortunately the album doesn't featurse any solo of the kind (quite simply there is no space, the 15 tracks fit the cd to the limit)
Autor: jazzowy alchemik o 9:30 AM