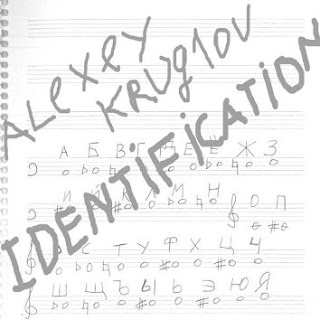 Not so long ago I wrote about Kruglov's album with Jaak Sooar trio "Karate" which was already his third album for Leo Records in barely over one year. Now, just a couple of months later, he's back to present what is to be he's most profound and monumental work as "Identification" presents a single 64-minute long  composition.
Kruglov explains in the liner notes how he used monogramic pattern (translating letters into the notes) to create some of the melodies that stay from musicians' names - a musical identification. Don't get discouraged though by the sheer length of the work or the teorethical premises.
"Identification" could be easily divided into smaller parts, it's narration offers a number of sudden stops, twists and turns. What is possibly the most unexpected aspect to it (considering Kruglov's previous recordings on Leo) is the expansion of the instrumental set - Alexey proves to be more than a capable piano player and it widens by far the sonic possibilites of the band. What's more - he sometimes plays both the piano and the saxophone simultaneously (in addition to playing two saxophones at once which he did before).
The entire piece is cemented by russian folk-tinged melody that, modified (alluded to, distorted, stretched, mocked even) appears several times during the set. Firstly, played just by the bass, hidden under ominous and eerie sounds of spare prepared sounds of piano, leading to a (piano) trio improvisation marked by sudden, short and swift phrases, or harmonic clouds produced by Alexey. Quite unusual then to hear a solo statement played on two instruments at once (by the same musician) - a shrieking, speedy saxophone mirrored for a moment by abstract piano chords, before going on its own for a series of tonal, timbral (overtones, shrieks, tongue-slaps) and scale flights. There's urgency, immediacy to Kruglov's playing. A wonderful contrast to    melody (possibly on of the 'identification' phrases), scattered and played in fragments by the trio in between of his crazy solo. And (around 14 minutes into the piece) the main melody appears again, pure and clear. Initially slighly shaken, but then played with uplfting sense of pride. And that sums up more or less the first quarter of the piece.
Next on the line are solo statements by the rest of trio's members. Initially melodic but than thunderous drums solo, than immaginative, light and fast bass (both of those bridged and commented by another set of short and stricly played trio phrases). And again a variation of the main melody, filtered through jazz scales of the saxophone solo. Scattered, counter-pointed by piano attacks and so on. And we're barely one third into the piece.
And I should stop right now to not ruin the pleasure. There's yet to be heard the energetic march-like moment (bit Ayler-esque), the melody played on two saxophones at once. The circus like whistle plays on the mouthpieces (can't not to think at those moments of Alexey as of an eastern-european incarnation of Rahsaan Roland Kirk). Or the minstrel-like sound of muted piano strings that make the theme sound like a medieval ballad. An entire set of twists and turns. Moments of playfulness, of abstact minimalism (especially the ones with echoing notes of prepared piano), of raw exhilirating energy. Untill the final, triumphant returning of the main melody.
Don't get discouraged by the theoritical premises and the volume of the work. This 64-minute piece is internally varied, going through constant cycle of construction and deconstrucition, the brilliant playing, the sensibility, the constant flow of ideas and richness of execution - it all keeps the music fresh and attention-grabbing. Finally (and that's another thing Alexy wrote about being his inspiration - theatre) as the instruments change their movements, configurations and appearances this piece becomes a play, a stage work, abstract, yet filled with action, drama and even comedy. Although it can be split into separate scenes, only when heard in its entirety it shows its true value and magnitude. Impressive and powerfull.
Autor: jazzowy alchemik o 9:47 AM