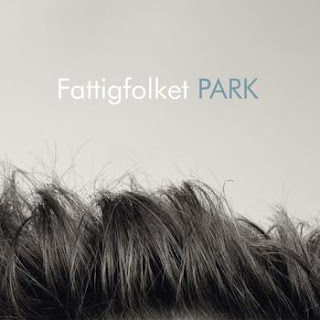 Fattigfolket:
Gunnar Halle - trumpet
Hallvard Godal - sax, clarinet
Putte Johander - bass
Ole Morten Sommer - drums
Ozella Music 2011
"Park" is already a third release from Swedish/Norwegian quartet (I admit I don't know the two previous ones - both released on danish ILK) and it's a concept album - a collection of 11 songs dedicated to/inspired by various parks that the band had a chance to visit during their tours. The green space, hidden inside the city serves as a place of creative refugee from the noise and fast tempo of modern life.
The Scandinavian jazz is commonly associated with the kind of fragile, cold ECM sound (inspired by the fjords), which is contraddicted by the explosive music played by the likes of Matts Gustafsson or Atomic band. Fattigfolket present yet another way as the 11 park-pieces (seven of them by Hallvard, three by Putte and one they share the credit for) all display a kind of melodic accessibility and warmth that don't fit neither the peacefulness of cold fjords nor the rebel explosion.

Through the set the of carefully written and undeniably pretty melodies the band displays a close interplay and fine musicianship. There's a lyrical trumpet solo in "Barnim Park", delicate and nostaligic theme of "Hesperides Park" played unisono by the frontline, the optimistic harmony (with an african echo to the bass line) of "Lohrpark", the pensieve "Mauerpark", the charming pristine "Innocentia Park" with its touching trumpet solo and delicate melody set by the bass and saxophone. "Marienburg" starts with an intimate bass clarinet introduction, than follows into a mourning melody played unisono with the bass, soloed upon by the trumpet, coloured with the steady bit of shaker. While an ocassional winter note or melody appears, or an upbeat track ("Brentanopark") the music is generally peacefull, warm and idyllic.
The playing is accordingly sensible and intimate, subtle. Never overdone but even modest and moderate by any count, with all the musicians focused on the overall sound rather than their personal input/image. While all of the musicians got a short solo spots it's the ensemble playing that matters really - the carefull exposition of the melody by the frontline, the gentle and clear underline by the bass (beautifull, gentle sound), colourfull and versatile drumming (although I find the sound realisation of the drums bit flat, like a pop-world music sound).

"Park" is collection of strong melodies, intricantly arranged and inspiringly played. Delicate, peacefull, soothing. It breaks no doors and doesn't intend to, it's rather an invitation for a walk into the park, to escape from the fast-paced reality. A very enjoyable, accesible, yet deep listen, a cure for a troubled mind. And, which is not to be underestimated, a music that can be enjoyed openly while you're flatmates are nearby (oddly enough they do mind some of the other things I listen to like, for instance, Peter Brotzmann).

Two tracks from the cd are presented in the playlist from 21.11.2011 here.
You can check band's videos on YouTube to get better idea (I counted five live versions of 'parks' there). Here you can hear the "Pfaueninsel Park" that begins the cd: