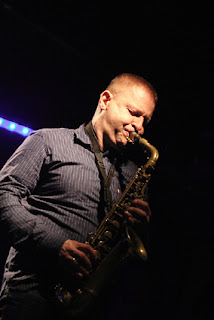 It was a final concert of this the 6th edition of Autumn Jazz Festival in Krakow and a worthy closure to a series a great concerts. Mikolaj's music has been an important part of Alchemia's jazz stage for as long as I remember and a festival without his performance would feel somehow incomplete.
I had a chance to hear Mikolaj play a solo performance this year, in Poznan during the Tzadik festival. The concert in Alchemia was obviusly different, maybe even had little less impact on me, yet my admiration for his music was only reinforced. I don't really want to write too much, I feel my impressions from the last concert are still valid (to be found in this post).
Mikolaj's playing comes from somewhere deep within him, and it's totally, almost painfully, honest. Ranging between the most subtle tonal, breathing, timbral shades up to expansive, explosive, sort of raging lyricism.
At one point a bass line of the music played in the upper bar can be heard and Mikolaj starts playing along on the bass clarinet, filling the pauses in the beat - which is not only entertaining but is also a sign of how much this music is attached to here and now.
Mikolaj's music is as sincere and direct as are his words and he's quite a storyteller. I'm happy to say I had a chance to interview him before the concert. Results of which will be posted sometime soon on the blog.
photo by Krzysztof Penarski
Mikolaj Trzaska - alto saxophone, bass clarinet, clarinet