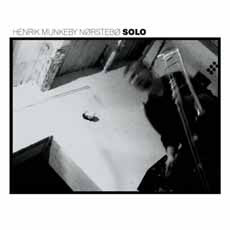 
Henrik Norstebo played in recently in Krakow with two fellow countrymen Adrian Myhr and Tomas Jarmyr. Non-musical circumstances didn't allow me to fully absorb the music but the playing was undeniably intriguing and Henrik Norstebo's contribution to music that evening was really inspiring.
I always say a solo album is a risky thing. Too often it's a vain statement of virtuosity, an awe-inspiring performance (on given instrument) which is appreciated only by other musicians (who play on the instrument). This is definitely not the case.
10 improvisation (no titles). Each one focused on a certain timbre, sound aspect, a musical subject. A collage of what can be done, what can be achieved on trombone. But not an exercise or a lesson or catalogue of sampled techniques - Norstebo's improvisations have a strong narrative core, cohesive yet opened form.
It is opened and closed (track 1 and 10) with two wonderfully melodic improvs, lyrical, gentle, played with beautifull warm, round tone. Two songs, simple and heartfelt (my guess would be an influence of norwegian-folk sense of melody in there).
On the other side of the spectrum Norsteby (alternating the melodic and abstract tracks through the album or alternating both approaches within one track) presents a wide array of weird, distorted, sometimes cartoonish sounds, talking, singing, growling through the bone. Track 3 brings a conventional melody but is enriched with sections of vibrating multiphony, than filled with scattered notes. Track 4 begins with a growl like sound but than gets ligher, squeky almost, full of cartoonish glissandos. Buzzing vibrating noise begins Track 6 vibrates like a harmonized mosquito (sung syllables create again the cartoonish character of the music, I couldn't stop laughing listening to this, so honestly enjoyable). Stuttering helicopter sound is accompanied by metallic clicks (mute used as a percussion device) in track 7. Next on the line is a meditative, hypnotic alternation of tense, long, vibrating (polyphony) notes and silence, with the metal of the instrument entering into the resonance with the sound.
Henrik Norstebo creates a set filled with unlimited immagination, rich in colours and ideas. He's playing  is a study in the creativity (all the unconventional techniques) but there's a clear in goal in his experimentalism - and that is to create music (and not to impress - in fact he's playing tends to be modest, he prefers  the charm of subtlety).
Honest, varied, intimate, sometimes refreshingly surprising, sometimes soothing the mind (track 10!). A brilliantly played album. Not only for trombone players (but you definitely have to like the instrument though).

I featured a track from the cd on this playlist, and another one here on that one.
Autor: jazzowy alchemik o 2:39 PM