Ken Vandermark - Mark in the Water [Not Two] 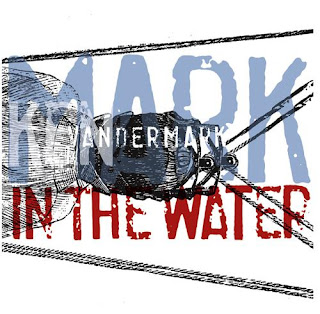 This Ken Vandermark's second solo cd (the first one - "Furniture Music" was released on Okka in 2003). 10 pieces of music selected from the concert he played on November 29th of 2010 in Alchemia. I've been there, I've written about it and I still remember that evening.
Quite often when you hear a live record of a concert you loved you get disapointed, without the aura of the stage, without the sense of community between the artist and the audience, the magic, the energy is gone and the recording seems just "ok".  Well, this is not the case.
The concert was played as a series of 'portraits' dedicated to the most influential reed innovators (Brotzmann, McPhee, Braxton, Lacy, Hawkins and others) and 'open pieces' in between them. The strategy devised for a gig didn't make it onto the record as only three of the portraits are present along with seven open pieces. A selection made by the artist himself who, looking in the mirror of the recorded material, decided some of the results were unsatisfactory.
Among those deemed worthy you'll find tenor sax solos "Dekooning" (portrait of Coleman Hawkins) and "Looking Back" (for Joe McPhee). Both deep, with a profound, feeling, passionate and mature. Filled with circling flights ("Dekooning") or a gentle, bluesy, "airy" tone and slowly evolving melody ("Looking Back"). A Bb clarinet piece "White Lemon" (for Jimmy Giuffre) that mesmerizes with delicate sound and elegant, simple, peacefull tune. A clear opposite to the same instrument's high, screeching and ear-piercing notes that seem to be in constant rush  in  "Burning Air" (for John Carter).  Or Bass clarinet "Future Perfect" (for Eric Dolphy) that starts with delicate slap-tongued low notes, than goes into high register, screaming, and than again into vibrating, half distorted,  gurgling noise alternating between all of those, playing with the dynamics and tones and breath rhythm, making all those impossible leaps seem easy and coherent.
The full lists includes portraits of Evan Parker, Coleman Hawkins and Anthony Braxton and open pieces dedicated to Peter Brotzmann, Jimmy Giuffre, John Carter, Eric Dolphy, Steve Lacy, Joe McPhee and, the only non reed player in the group - Fred McDowell. Four pieces on tenor saxophone and bass clarinet alike, two on Bb clarinet.
Wether playing open pieces or portraits what Ken Vandermark is really doing is looking in the mirror and making a self-portrait. And it comes out as a picture of an excellent musician, remarkable artist and sensible soul that is as deeply passionate about music as one can be. A mere chapter on his musical journey, a document of his self-conscious development as an artist and a musician. A picture of a mark in the water (trying to capture and fix what never stays the same). I loved the concert, I love the album.
"You walk in, plant yourself swuarely on both feet, look the other fella in the eye, and tell the truth" - James Cagney (on the process of acting) - taken from the cd's inlay.
* couple of pieces from the album ara available in the playlist aired on 12.12.2011


ps.
A round of applause also for Rafał Drewniany from DTS Studio responsible from recording, mixing and mesterizing the material. The sound quality is crystal clear, crisp and full of details up to sound of Ken's breathing in between the notes.
ps 2.
A pair of extras - "Sweet Dragon" composed by Joe Mcphee (closed the first set of the concert) and Albert Ayler's "Love Cry" (the evening's first encore) can be found on Not Two's compilation "Krakow Jazz Fall 2011" that presents some of the music played during the last year's edition of the festival.
Autor: jazzowy alchemik o 4:19 PM