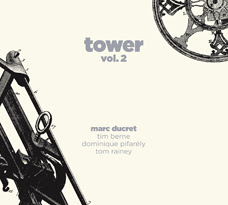 
The second volume of what is Marc Ducret's compositional effort inspired by Vladimir Nabokov's "Ada or Ardor" brings together a group of long time musical partners - Berne, Ducret and Rainey were playing together as Big Satan trio while Ducret and/or Rainey would also play in various Berne's group of the 90's and 00's (Bloodcount, Paraphrase, Science Friction, Hard Cell), Ducret played also in the Dominique Pifarely / Louis Sclavis Quartet as long ago as in 1992. Which is to say that those musicians are no strangers to each other and to the listeners alike.
"Sur l"Electricite" starts with a pensieve violin sound, emerging from the noises of the city (engine sound maybe, tv or radio in the background), gradually the noises disappear, guitar and drums join to create an intricate, tricky base for a violin to cintinue it's monologue, its sound getting rawer, the playing being denser, more intense. As finally the saxophone comes into the picture the band playsa peculiar theme, carefully arranged into the three voices harmony, going back and forth between consonance and dissonance. And then the sharp chords and drums - guitar duo introduce yet another melody as they are joined in turns by violin and saxophone, creating a strong crescendo, slowing down to convene improvised lines of twisted melodicism and yet clear harmonic structure. Rainey's work, dynamically shifting rhythm accents throughout is not to be missed. After a short but substantial sax - drums duo, Ducret brings a repetitive riff and the entire band goes into heavy rocking mode to finish the piece with a blast of a speedy unisono.

I'll try to be brief(er) now as there's no point in dissecting the remaining two tracks in such unnecessary detail. "Real Thing #3" begins with a carefully intervowen lyrical melodies played by violin and alto - they registers and timbres a great fit and a nice platform for a nice guitar solo (assisted by the tricky rhytm patterns). As the first melody appears (saxophone joins the guitar) it becomes almost instantly a point of counter-point for a violin. Let me not spoil the fun of discovering how and stop here. The "Softly Her Tower Crumbled in the Sweet Silent Sun" covers equally vast ground to begin with a soft melody (that would echoe throughout the piece) through energy-discharge passages of rebel playing to end with
By this point one should be able to immagine how multifaceted Ducret's compositions are and how elastic and interchangeable are the roles musicians/instruments play in them, as any constellation of the four instruments is possible. The ability to shift seamlessly between the improvised bridges and written melodies, to move dynamically between the heated crescendos and hushed delicate whipsers, to mix the harmonic and melodic structures and the roles/responsibilites, to play with all those concepts - that's what makes this music work.
As the music is inspired by literature it tries to emulate narration games with its own musical language - and there's something theatrical to the way the instruments interact.
The playing by all four is brilliant : Berne's tone and idiosyncratic harmonic language, Pifarely's pungent tone, Ducret's own recognisable sound and versatility, Rainey's rhythm and energy mastery and ability to find just the right touch - it's all to be found here. This music demands focus as it only slowly unfolds its melodic, harmonic and colour richness, its mulitstructured, post-modern in many ways, narration. Strong and easy to recommend, especially for those who know what to expect (as far as their sound and way of writing goes) from Tim Berne and Marc Ducret. Which is to expect another set of good music.
Autor: jazzowy alchemik o 3:46 PM