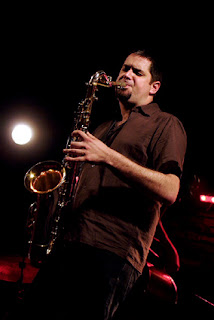 Dave Rempis played in Alchemia a lot. That's a fact. But Krakow's audience had never yet had a chance, as I daresay few did before, to see him play a solo concert.
There are few things in music as demanding as a solo performer. To be able to fill the entire space, to create the entire musical narrativa with just a single voice and, from the audience's perspective, to be have to focus on one person on stage, it can be exhausting, it can be weary, it usually is in fact, it happens to be also extremely satisfying.
And so was this concert. Dave filled the space with fluid alto lines and shattered sounds. The range of ideas was impressive as their depth. The performance was not only intimate and extremely personal, which is usual for a solo setting, it had also an intricate logic and sense of direction that are much rarer.
The music flowed and streamed, inspired and inspiring. Thank You Dave.

for the encore, Dave played soulfully digging his teeth into this classic: