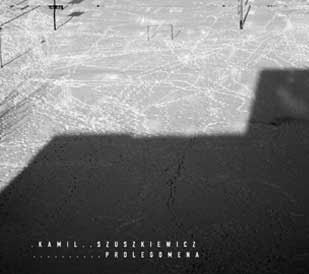 Kamil Szuszkiewicz is a part of Warsaw active improsised music / jazz scene and he appeared on the blog on the occasion of Profesjonalizm - "Chopin Chopin Chopin" cd, which is but one of the many projects he's involved in. "Prolegomana" is his debut as a leader, released on the autumn last year by the Slowdown Records (run by another active musician on the Warsaw scene - Maciej Trifonidis Bielawski).

"Prolegomena" showcases Kamil Szuszkiewicz not only as an interesting trumpet player but also as an intriguing composer. The initial "Recytatyw" is basically a trumpet trio, sharp trumpet notes cut through the air and the broken drumbeats.  The low, rumbling tone of baritone comes in the middle to add darker hues but stops suddenly to leave on the stage just the single trumpet note, around which slowly but sytematically other instruments start to join back (at which poin the track ends in the fade-away). "Knury" doesn't even feature the trumpet but matches the two baritones against and their scattered honks against the incessant percussion drive and screaming high-pitched arco bass sounds.
Most of the remaining tracks are played in quartet format with the piano. "Pawana" is gentle and brooding with a simple piano chord and long notes of solitudine played by the trumpet and the bass, the pedal drum playing a steady beat that isn't that much different from a slow hearbeat cycle. "Ryfa" brings some fervent soloing. Dynamic "Skit" is based on the heavy bass riff overlapped with high-pitched screeching sounds of the bowed strings. "Kraksa" brings more of the intriguing mood that reminds a little bit of early Polanski's movies and Komeda's music. There's the same harmonic edge and just a hint of suspense and self-inflicted paranoia.
"Aria" is possibly my favourite track of the album, a haunting melody played by the trumpet (soft and gentle tone, spacious and airy) and the gentle bass, with a subtle percussion and an electronic sound that appears cyclically, an alien element that becomes an intricate part of the structure. As the music dissolves and disappears, the electronic cycle continues, remaining suspended in the silence.
"Kredyt" is a piano - drums duo, as right hand circles in an assymetric series, the left one hits with the dissonant chords and the drums create a small crescendo within each cycle.
Last but not least "Pietuszki" pairs the deep timbre of the bass and baritone with the lyrical trumpet,
the delicate melody flows gently, first played in unisono, then divided into parts played by the separate instruments, lyrically and enchanting (subtle and coulourfull percussion in the background throughout).

This is a most welcomed debut as a leader, one that shows not only a skill-set to play the music but also Szuszkiewicz's vision as a bandleader and composer. And this vision, between the fervent noir moods and deeply lyrical is wholeheartedly recommended.

some tracks are presented in this radio playlist.