Peter Brotzmann with KonstruKt / The Damage is Done at Manggha (Krakow Autumn Jazz; 31.10) 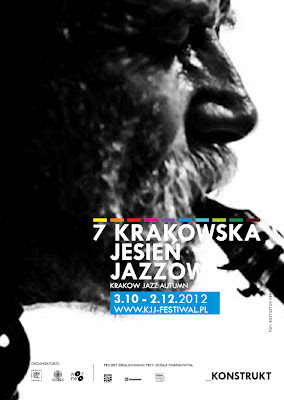 Peter Brotzmann came back to Krakow for the second evening of the festival and he brought two bands with himself - a turkish collective KonstruKt (something new) and The Damage is Done (something old).

KonstruKt is probably a fairly obscure group but they caught mine attention with three recent collaborations - Marshall Allen, Evan Parker (a live cd from Akbank Festival which I wrote about here) and, last but not least, Peter Brotzmann. The line-up for the evening was alto saxophone, bass guitar, drums and old-school korg synth and some other retro keyboards.
The sax gave a signal with a fiery, frenetic phrase and the band started brewing - dense and intense, with powerhouse drumming, sci-fi keys and some fastwalking basslines. An updated, free and wild view on the fusion easthetics where (finally) the general sound of the group is more important the solo pyrotechnics. Once the Peter joined and added his own tsunami stamp on the music the band really got it going on. There was the right kick (and the left punch) - boiling and turmoiling.


For the 2nd set showed up the quartet of Peter, Joe McPhee, Kent Kessler and Michael Zerang, which took the name of the Damage is Done. Which is the title of the double cd released on Not Two and recorded couple of years back in Alchemia. The concert which, I remember it vividly, got me so pumped up that I stayed up till 4 pm, writing one of my first reviews  ever (curious polish reades can find it Diapazon).
They had me then, and the still do. Four incredible musicians and minds playing music on the spot, putting to the test all the sensibility and emotional power they can muster. Brotzmann tornadoes on the saxophone, no prisoners allowed or utters cry of despair, McPhee balances the sound with the depth of blues and Kessler and Zerang create a myriad of textures and grooves to push the music forward, unstoppable. Energetic till the point you want to jump up high in the air or lyrical and tear-breaking. To watch this quartet is to follow a heroic battle scene, where there are no prisoners allowed.