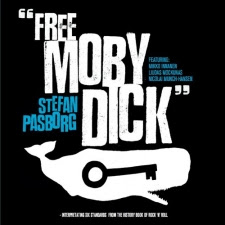 If the title "Free Moby Dick" doesn't explain itself clearly enough there's a tiny print below : interpretating six standards from the history book of rock 'n' roll. If that doesn't sound like fun that I don't know what does.

Stefan Pasborg gathers together three friends of his, Mikko Innanen from Finlad, Liudas Mockunas from Lituania and Nicolai Munch-Hansen to perform together such rock'n'roll classics like "Black Dog" as well as "Out In The Tiles" by Led Zeppelin, "Iron Man" by Black Sabbath, "Paint It Black" by Rolling Stones, the modern rock anthem "Seven Nation Army" by The White Stripes" and the lushfull ballad "Johnsburg Illinois" by Tom Waits.


This is a rock tribute but it's definitely not a tribute band, each track is arranged* differently, you will recognize clearly the distinctive riff and rock energy, yet there's some surprising twist to it.
"Black Dog" emerges from a dark and misterious group improvisation with a short blast of the main riff, only to dissolve in the cloudy mist again. "Out In The Tiles" swings swiftly and joyfully.
"Iron Man" begins emulating the dark Sabbath guitar energy but soon after stating the main riff the repetitive line becomes a base for somewhat bluesy and energetic baritone solo, another theme statement breakes the piece in half and speeds it up for a rock'n'roll ride and Mockunas's pyrotechnic saxophone screaming acrobatics, piece slows down again in the end to the original's slow kick.
"Seven Nation Army" starts with a lyrical tenor solo, there's some late night jam feeling to it, spare brushes against the drums, gentleness, slowly the melodic line appears, silent and gently...and after a moment of silence the hell breaks loose the riff appears in all its mighty power and energy, the saxes scream, the bass and drums kicks in the groove for a ferocious (tenor) yet very much soulfull (baritone) ride.
"Paint It Black" starts again slowly, with fragments of the melodic line scattered and sparsed in the cloudy improvisation, sorrow and dramatic. As fast rolled hit on the drums give the sign they quartet state the melody in all its majestic glory, until once again it's fragmentarized and parceled in the slowly disappearing notes.
"Johnsburg, Illinois" starts as beautifully as a charming ballad it is played by the bass - tenor duo, joined soon by the lush brushwork. A hearbreaking late-night bar ballad.

Free Moby Dick is a success on many levels. Brilliant selections and arrangements, fantastic playing and synergy. While paying a tribute to some legends of rock music history it might be also a way to attract new listeners to jazz (nothing bad in that, mind you). Fun, Jazz and Rock'n'Roll? Jazz Rocks? Pick your marketing line. I enjoy the heck out of it.


*All tracks arranged by the leader, "Paint it Black"  co-arranged with Mikko Innanen.