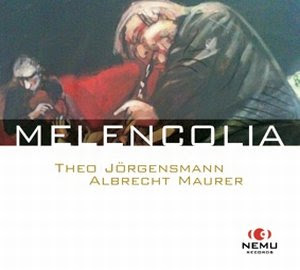 "Melancolia" is inspired by Albrecht Durer's engraving from the 1514, symbolic picture produced in times scarred by the inhumane Peasant Wars. Nonetheless the improvised suite presented on the cd is not necesseraily sad.

Theo Jorgensmann and Albrecht Maurer playing respectively their wind and string instruments draw on all kind of influences from folk, classical and jazz areas to perform a series of improvised pieces to form a suite. And the duo creates a myriad of impressions, mostly delicate and fragile, sometimes heated, pairing the heartwarming, round tone of the clarinet and hearbreaking, tearing sound of the viola, and this dual nature works perfectly.

Take for example part 6, the two instruments mirroring themselves in a spiral line of frail tones that seem to ascend, as if gaining some spiritual momentum through the aliquotes, the piece ends with a telepathic progression, a pure act of synergy as the duo strikes together in a perfect unisono a heavenly phrase. The next part of the suite on its hands is a battle - like call & response, a series of rapid phrases worthy of a musketeer dispute.

There's immediacy that distincts only the most succesfull duos - the mastered art of provoking and reacting at the same instance. The music has distinctive chamber quality, it's pensieve, thoughtfull, focused even at the most harsh and agressive moments (like destructive dissonances in the beginning of the "Melancolia epilogue").

Nonetheless the subject "Melancolia" is an inspiringly constructive dialogue, a work in creation of ad hoc order and structure, with sensibility and emphatic approach toward the partner. As a result we have a music that's convincing and touching, engaging and at times purely bueatifull.