For the second time I was honoured an invite to participate in El Intruso 4th Annual Critics Poll 2011 where bloggers from around the globe proposed their selection of best of the last year. I waited before posting here my votes until the general results would be presented on El Intruso. You can consult the Poll here. More than 20 categories and only 3 possible choices for each (gave me quite a headache) - my choices (and short comments) will appear on the blog in the next few days cut into few separate posts.
Obviously it's all fun, all subjective, all interchangeable in many ways - art is not a race, any kind of comparison is hardly possible in most cases and most of all in the end it's not a list of "the best of 2011" but rather "my favourite cds or musicians in 2011 based on the concerts I got to see and cds I got to listen to in 2011" - which leaves leaves an entire universe of musicians, concerts and cds I didn't get to see for one reason or another.
Having said that - enjoy!

1. Musician of the year- Mikolaj Trzaska
- Joelle Leandre
- Andrzej Przybielski
Mikolaj Trzaska did release more than a handfull of cds last year (I invite you to read the interview with him to have more details) and I reviewed on this blog so far the Inner Ear Quartet with Steve Swell, Tim Daisy and Per Ake Holmlander - "Breathing Steam", "The Last Train to the First Station" by Reed Trio with Ken Vandermark and Waclaw Zimpel and "Kafka in Flight" with Vandermark's Resonance Project - all fabulous albums. What is much more important though is that his solo concert during the Tzadik Festival as well as the trio concert with Mark Sanders and Olie Brice (Ha Tichona trio at Alchemia) were probably the two most powerfull music statements I had witnessed the entire last year, first filled with sense of incredibly intimacy, honesty, latter positively and staggeringly powerfull and freewheling (and those were not the only occasions last year to see Mikolaj on stage, you can find much more in the blog's archives).
Joelle Leandre simply stunned me with her double album  "Live at the "Ulrichsberger Kaleidophon" - featuring  two completely different performances and two powerfull visions. It's a must.
Andrzej Przybielski passed away at 9th february this year. My nomination is not merely a tribute - it is ironic enough that a musician that released only one cd as a leader in his liftetime has now three post-mortem cds ("De Profundis" with Oles Brothers, "Sesja Open" and "Tren Żałobny" - which I should write soon about). A parting gift? If so, a welcomed and appreciated one.

2. Newcomer Musician
- Alexey Kruglov
- Brian Settles
- Rafal Mazur
Alexey Kruglow may be known well for followers of the russian improv scene but most of us got to know him through the recent Leo Records releases - between march 2010 and august 2011 he released four albums for this label and they're all easily recommended. You can find on the blog the reviews of the monumental "Identification" and "Karate" with Jaak Sooaar Trio. Strong and fresh.
I don't know really too much about Brian Settles beside the music on his debut cd "Secret Handshake" which speaks clear and loud for his talent.
Rafal Mazur is hardly a "newcomer" to any Krakow-based improvised music fan - he's been long a mastermind behind the growing community of improvising musicians. What I hope for is that he reached at leas some international exposure which he deserves and concerts like the one with Liudas Mockunas and Raymond Strind (recorded and hopefully to be released) could help that. Which was just one of many fantastic performances I could attend this year (especially duos with Mikolaj Trzaska and Keir Neuringer desereves to be mentioned). I might add another honor mention to this category - Ilia Belorukov - his inspiringly creative approach to the instrument is something to behold. He played in Krakow with Rafal Mazur and Mieczyslow Gorka. 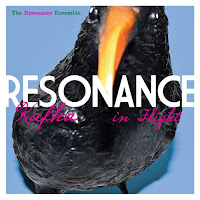 3. Band of the year
- Resonance Ensemble
- Mikolaj Trzaska IRCHA Clarinet Quartet
- Splatter
Ken Vandermark's Resonance Project gathers together some of the best in the free jazz world, much more than an "all-star" group this band is guided by Ken Vandermark's vision and driven by musicians' passion, chemistry. I heard only stories about the mini festival in USA, I can't wait to see them live this march (and get the new cd) and their last one "Kafka in Flight" started the 2011 with a blast.
Mikolaj Trzaska and Waclaw Zimpel play also together in IRCHA Clarinet Quartet, a 4-voiced clarinet choir,  that charms on stage (as on this occasion) on cd "Lark Uprising" with Joe McPhee. In their music the spirit of Coltrane, jewish melodies and modern chamber harmonies meet together. I'm quite ashamed I haven't had  chance yet to listen to their second cd (released in december).
I nominated Splatter because of their cd "Scraffiti" which contains some of the most ensemble-conscious democratic improvisations I heard. A true beauty.

4. Newcomber Band
Ha Tichona Trio (Trzaska / Brice / Sanders)
Rafal Mazur / Liudas Mockunas / Raymond Strid
Vojtech Prochazka Trio
This category is based entirely on live permormances I have seen last year. Three unbelievably good concerts and I can only hope to hear much more from those trios (incidentally another common indicator). Ha Tichona Trio is supposed to have an lp released by No Business (more in the interview with Mikolaj Trzaska), the concert by Rafal, Liudas and Raymond was registered with plans to press a cd. And I know that Vojtech Prochazka with his trio was planning to record another session and I hope they got to do it (their debut cd is more of a modern mainstream thing, quite good but definitely didn't live up to the promise they delievered on stage).